My first real interest in 2D cartoon animation was inspired by a 1950's TV show, Woody Woodpecker. Each half-hour show was comprised of four theatrical cartoon shorts produced by the Walter Lantz studio over the past two decades, plus a live-action segment in which studio head Walter Lantz would do a mini documentary about some aspect of animation production.

Here is a link to one such segment now showing on You Tube.  Seen today, the live action footage includes scenes that were clearly staged for the filming, such as story conferences and animator interactions. But at the time I felt I was being let in on animation production secrets. Indeed, there was little information available to the general public on this subject, so anything at all was better than nothing.

At the time I could not discriminate between Walter Lantz studio quality and that of the Walt Disney organization, nor between Lantz and Warners or MGM. But I did recognize the sophisticated animation in the Woody Woodpecker cartoons of the late 40's and very early 50's, and I didn't know then that they were more the work of directors Shamus Culhane and Dick Lundy and their animators than of Lantz himself. It was Walter Lantz who seemed to have reached out to me, and so I wrote him a letter. 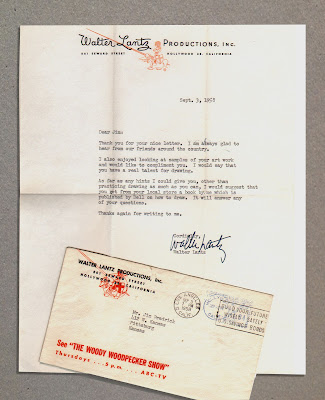 When the personal answer arrived, I was thrilled to be treated with respect and to have been acknowledged by this important animation producer. The book he mentions is Walter Lantz "Easy Way to Draw".  I don't remember now if I got the book because he mentioned it, or if I had it already.  It was an attractive book published by Whitman Publishing, who published hundreds of titles for children including many, many coloring books. This book was more-or-less in the style of a coloring book, and the illustrations were quite appealing. 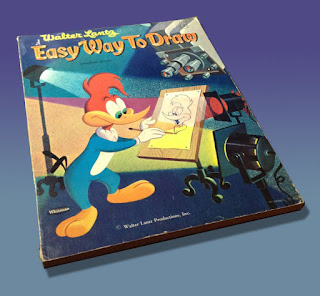 As promised, there were many pages of step-by-step illustrations of the drawing of the Walter Lantz characters, and I tried and tried to copy and then extrapolate from these examples.


The only problem was, though there may be an easy way to draw, there is no easy way to learn to draw.  Aside from the examples of a very few natural artists, the rest of us have to work very hard to draw well. The professional artists who illustrated these pages had worked for years to be able to do this kind of work.  And let's face it, no one draws like this. How-to-draw-it lessons like these are really deconstructed; the artist starts with a finished drawing and works backward to arrive at the basic shapes.  I know, because I did it myself one time in a book called You Can Draw Animals Right Down to the Skin.


I can think of a dozen examples illustrating this same bogus process, including a wonderful parody by Farside creator Gary Larson.

Nevertheless, I was inspired. I yearned to be able to draw like this, well enough to be paid to do it. I kept after that dream, and eventually I have, I believe, learned to do it pretty well. But don't let anyone tell you that there is an easy way to draw, or an easy way to play classical piano, or an easy way to do just about anything worthwhile. There are only hard ways to learn an art, after which you may say you have "a way to make drawing look easy."

Next:
A Woody Woodpecker walk cycle I did at 12 years old.  Plus, proof that I could do 3D if I wanted to!