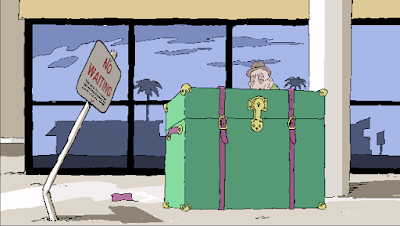 Here is the final version of my first scene to be finished in color for my film Carry On.

My next scene, Scene 1-3, precedes this one in continuity; it will show the taxi with Old Man and trunk arriving at the airport.
Posted by Jim Bradrick at 2:30 PM No comments:

Although character animation is for me the most satisfying part of 2D animation, it is sometimes necessary to do other animation along the way. This is animation of objects, like the Old Man's trunk, that are tedious to draw and yet give conviction and substance to the scenes.

I did a recent post talking about the difficulty of imitating 3D animation in 2D (No. 182), but it is not so bad if you are not trying so much to imitate 3D as to simply make a convincing 2D interpretation of the movement of 3D objects.

In the scene we are looking at here, there is a wide exterior shot of an airport terminal departures building.  A taxi appears at screen right, following a curving driveway, and stops to unload a passenger and his luggage.

I considered making the road and curbing straight across, so that the taxi could be a single image sliding across from right to left.  But, as usual, I decided on doing it the hard way.


This shows the beginning (at right) and ending (at center) positions of the taxi that drives in. As you can see, the vehicle turns in perspective as it drives in. It also diminishes in scale. 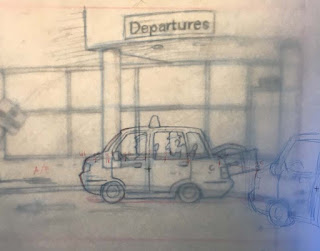 It would be possible to animate the taxi moving across the page from pos. 1 to pos. 2, but there is a helpful shortcut I can use.

If I superimpose positions 1 and 2, then the inbetweening will be easier and more accurate. Tracing from my pos. 1 drawing, I made a more complete rendering that is registered directly above pos. 2; the inbetweening is now an obvious process.

The consideration of arcs while inbetweening is in this case moot; the arcs will be introduced in the final placement of the drawings along the path of movement.

Lasting 18 frames, this will require 9 drawings (shooting on 2's).  There will also be some squash and stretch as the taxi stops, but that is a problem that can be addressed separately.

Here is a view of five of the drawings being rolled on my animation board.

When this is done, I will then reposition the drawings along the path. In past years, I would have done this with scissors and tape, cutting out each drawing and re-mounting it onto a new sheet of--wait for it!--Acme punched paper.

But giving in (just a little) to today's digital convenience, I can just make a spacing guide and then shift the scanned drawings in Animate Pro.


Next: That inking and painting again!

From Paper to Digital


After a month of vacation travel, I am back home and at work inking the first scene of my film Carry On. The traditionally paper-animated drawings were scanned and imported as vector images into Animate Pro, and now I am inking them onto a new layer where I will also apply color and the background.

It seems that many animators now have gone to TV Paint in preference to Toon Boom or other software, but Toon Boom Animate Pro is what I have, and I am happy with it. Onward! 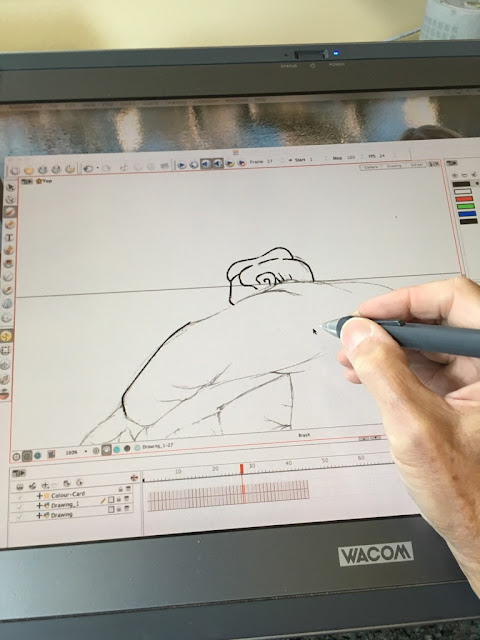 Posted by Jim Bradrick at 12:21 PM No comments: