To conclude the current blog series (No's 157, 158 and 159) we now will have a look at my revised pencil test.  I had said I would be erasing arms from the original drawings rather than creating all new drawings, and you will be able to see in the pencil test the ghost drawings where I was unable to get them erased completely.

Here is the new pencil test.

Now this character-without-a-name raises up his arm in a flamboyant way that says as much about his arrogance and intolerance as his facial expressions and his head movement.  And it has come to me where I had seen almost exactly this same gesture before.  It was years ago, when I lived in New Orleans. In the lobby of a hotel where I then worked I saw a handsome young FBI agent look at his watch in precisely the same way. (How I knew he was with the FBI is a longer story.) But he had an attitude combined of vanity and self-importance that I obviously have never quite forgotten.

A good character animator must be an acute observer of human behavior. We never know when we might be able to make good use of such observations.


Posted by Jim Bradrick at 3:50 PM No comments:


Last time I revealed the extremes and breakdown drawings of my scene of an impatient man making a show of looking at his watch to express irritation with my main character.

Since then I have followed through as promised, filling in all inbetweens and creating a pencil test. Here is the result.


In short, I was disappointed. The head movement works well, properly expressing the man's disdain as well as his arrogance. The arm movement as he brings his watch up in front of his face: not so good. It is just a case of failure to analyze adequately the body language that I want to put across. Body language is more important even than facial expression in conveying a character's intent and attitude, and it isn't working.

So I am back at it again, erasing all the arms and rethinking the movement. In the next post you will get to see whether my "second draft" is any improvement on the first.
Please stand by...
Posted by Jim Bradrick at 8:28 PM No comments:


In my last post, No. 157, we looked at translating storyboard poses into actual animation poses. Now I want to follow through for you as I develop the additional extremes and breakdown drawings. In a subsequent post we will end by putting in all the inbetweens and finally seeing the scene in full animation.

The storyboard for this scene was able to be illustrated with just two poses: an impatient man ostentatiously looks at his watch in frustration over the time it is taking the Old Man (off camera) to get his bag through the X-ray conveyor.

(At this point I recommend you review post No. 157, as it will make the following easier to understand.)

My analysis of this scene tells me that there is much more to it now than just smoothly inbetweening from the first pose to the last. Acting the movement out, I can feel a shifting of weight in the upper body as the man's right arm is brought up. Also, I see his head rocking over, eyes closed, as he aligns his eyes with the big watch on his wrist. At last he opens his eyes and scowls at the face of the watch.

I remind you that this is one of those situations in my blog when I dare to show you my work in progress before I have proven to myself that it will even work. I am relying on my experience, but if my planning does not work out, I will show you that and then show what it takes to fix it. Then perhaps we will both learn something.

Here are the drawings so far, with commentary. 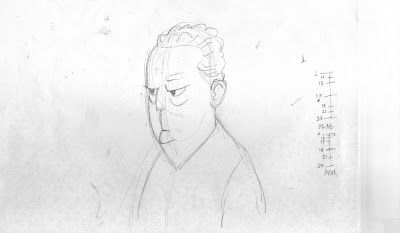 The starting hold drawing, No. 1. 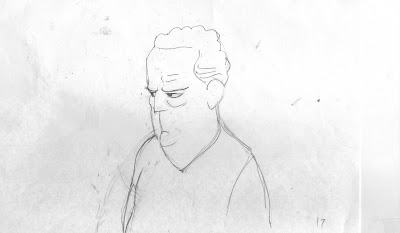 Breakdown, No. 17. He begins to shift his weight and lift his arm, leading with the shoulder. 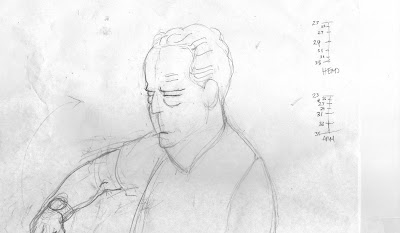 Extreme, No 23. Note that the head and arm have different spacing charts, so that whereas this is an extreme or change of direction drawing for the head, it is just a continuation of movement for the arm.

Note: As usual I am using the numbering system recommended by Dick Williams and adapted from the Disney hand-drawn animation system of numbering, where the x-sheet frame number coordinates with the drawing number whenever possible. Thus, drawing one starts on fr 1, but as 1 is a 12-frame hold, then the second drawing is going to be number 13. This forces me to at least attempt to time out the whole scene on my x(posure) sheet before I draw it, and that is a skill worth practicing and worth getting good at. 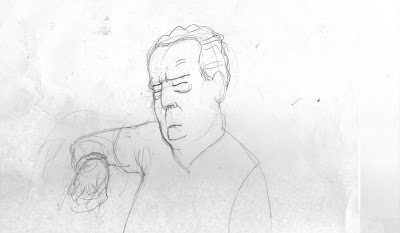 Breakdown, No. 29.  The arm continues to move up in an arc as the head begins to move to our right (his left), leading with the neck and torso. 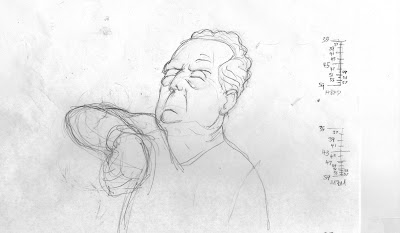 Extreme, No. 35.  The head eases in at the top of its movement. The arm continues in its arc, the elbow reaching its highest point on this drawing.  The wrist is rotating into place. 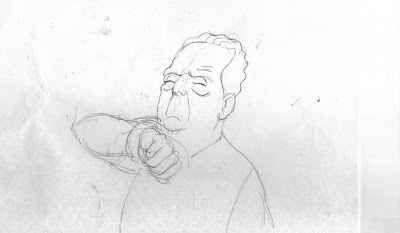 Breakdown, No. 45. The elbow is dropping down. The eyes are still closed, but from here to the end, everything is moving slowly enough that the opening of the eyes and his facial reaction can be observed and appreciated by the viewer. Animators have learned that a change of facial expression is wasted if it takes place during a broad movement of the head or when there is distracting action in the frame. 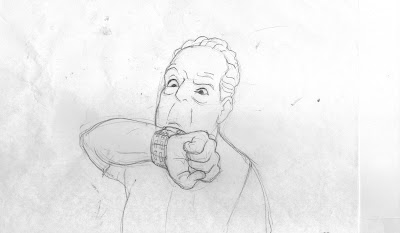 Extreme, No. 59. The final drawing. An alternate way of ending this would be for the arm to come to rest, and then the face, on its own layer, would open the eyes and react, but I am betting that it will work just as well in this case to have all moving drawings come to rest at the same time.  It is a violation of the rule of overlapping action, but like all rules, this one may sometimes be properly broken.

I'll see you next time, when we will find out if I have this right. Wait for it!!
Posted by Jim Bradrick at 8:57 PM No comments: