A wish for Peace on Earth, at second thought, is not enough right now. An equally important hope is is for An End to Tyranny, which is on the rise, even in the United States where the man now in the White House wants to be our tyrant.

Sorry.  I try to keep this blog non-political, and yet... 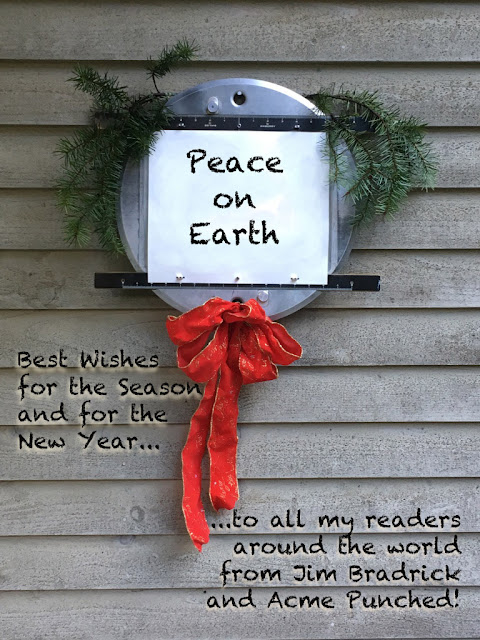 Posted by Jim Bradrick at 9:08 PM No comments:

No. 176, Staging with Perspective


Just now I am working on a scene that has to match the previous scene closely; the difference between the two is just a matter of "camera" angle on the two characters. 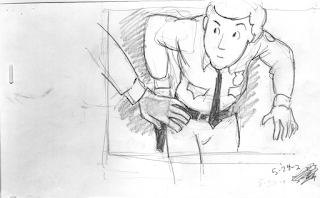 (The female officer is about to draw her service pistol, but the male officer  quickly blocks her move with his hand. She then looks up at him to see his face.) 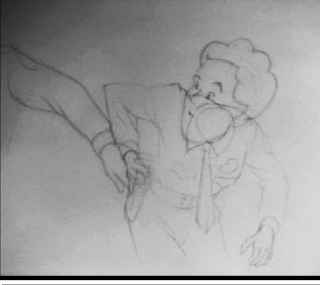 The following scene, 5-25, was drawn this way in the storyboard... 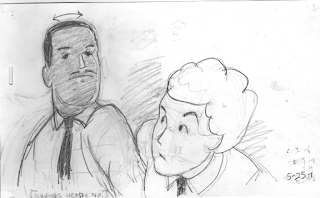 (The male officer shakes his head, as if to say: You don't need that here.)

...but this drawing no longer matched the animated version of 5-24, so my problem was to make a layout of 5-25 that looked like a natural change of angle.

I had to imagine and draw a rotation of the crouching woman officer and a corresponding view of the man.  It took me a couple of tries before I got what I was looking for. Note that the perspective is quite close to the storyboard panel above. 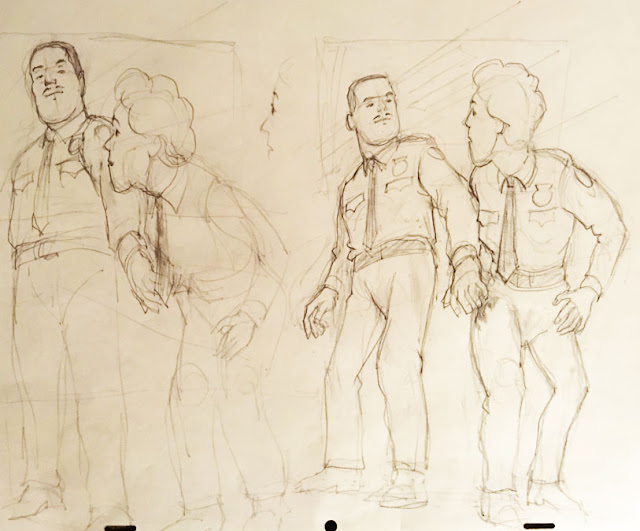 The version on the right was what I felt I needed. Though the final layout was to be a closeup, this long shot showing the characters' full poses was important for understanding how the heads and shoulders should be positioned. Note the faint perspective lines behind the two figures.

From here it was a simple job to do the closeup layout. In the end what is important is the eye contact between the two characters, but getting the poses right helps to make a convincing and dramatic shot.

Posted by Jim Bradrick at 6:21 PM No comments:

In animation, sometimes a character moves, then returns to her original pose. Most obviously it happened all the time in games animation a few years ago, where a character always had what was called a root position. With the increased complexity of computer gaming animation nowadays, it probably isn't so important, but back then whether a character took just one step or ran and chopped with her sword, the animator always had to add the frames that got his character back to the root.

And when you have to animate something like that, you will always ask yourself what it would look like if you just ran the to drawings in reverse, so you wouldn't have to do any fro drawings.  Because you are always looking for ways to economize on drawings, right? Unfortunately, the answer is usually no; it won't look good.

What about a head turn?  Yes, it can work, if certain conditions are right.

Here is an example that just came off my disc this week:

This man is looking off to the left of the screen.  For a moment, he turns his head to look to screen right, holds, and then returns to his original position exactly. I filmed it with two repeats in this pencil test so that you can observe it carefully.

It works because there is nothing in the head that is subject to drag or follow-through. (If the man had long hair, you would have both drag and follow-through.)

It works because what he sees when he looks to the right does not cause a change in expression or demeanor. (If he saw something that startled him, it is doubtful that he would return to his original pose afterwards.)

It works because the blink in the middle of the move works in either direction.

Yes, and yet I did do something to make the return different from the original move: I added three more inbetweens to the return move, six frames that were just enough to show a slower rate of speed.


*    *    *
And did you notice a drawing error in this pencil test?  I did; the hair on the side plane of his head should look narrower after he turns to screen right, but it doesn't. My bad! as they used to say.  But I have now fixed the drawings.

Posted by Jim Bradrick at 10:25 AM No comments: