When a stage actor enters the stage, she must be already in character by the time she becomes visible; otherwise, the illusion of the moment is lost. Going offstage is the same. If an actor's character is angry and exits in a mood of contained fury, the audience must not see that actor relax into nonchalance as he goes backstage.

I once saw a play where there was a wall with a street door at the rear of the set. Suddenly the door burst open and a woman rushed in, slamming the door behind her as she leaned against it, catching her breath. She had created the illusion that she had been running all the way to her door.  Of course, she had done no such thing. She had been waiting for her cue at the back of the door, and when it came she seized her character in her mind, quickened her breathing, and leaped into action. It was professional expertise, and it was engaging and convincing.

In animation, as in theater, our characters must be in character from the first frame, and if they are entering or leaving the frame, they must be held to the same standard as their live counterparts on stage or in film.

For animators, this sometimes means making drawings or poses that are not seen by the audience. If we are walking someone off, for example, anyone ought to realize that even if you are left showing only an elbow and one foot, it would be best to base those parts on drawings of the whole figure. But sometimes a character might be coming into the frame in some other way, and one might be tempted to fake it and just draw the portion of the character that is actually included in the frame; this might work just fine, but you may find it a good idea to do some drawing "off screen."

I have an example here where I decided it wasn't good enough just to fake it.

This is from the same scene I discussed in post No. 151.  You can review the pencil test here.
Where I ran into trouble was in the first few drawings. Starting out with his head down, he brings it up as he stands. The first key drawing I did after the resting poses was this one:

How do I inbetween  numbers 7, 9 and 11 without seeing the lower half of the face in drawing 5?  Well, just because I was running off the bottom edge of the paper where I was already well out of the camera frame, that did not mean I could not draw the image I needed.  And so I did, attaching an extra piece of paper to the bottom of 5.  Then I could easily do accurate inbetweening for the drawings that would be seen.

And, what of drawings 1 and 3, where we see only the hat and the curve of his back?  Oh, those I just faked.  Which really means, I extrapolated based on my experience. As I say, it sometimes does work to "fake it." By trial and error, you just have to learn when you can do that, and when you shouldn't.


Posted by Jim Bradrick at 7:29 AM No comments:

Most of you, except those who have never worked in or experimented with a 3D application such as Maya or 3D Studio Max, will know what the Z axis is. Whereas the X axis indicates movement to left and right, or side to side; and the Y axis is up and down, or top to bottom, the Z axis is front to back, moving toward or away from the camera.  (Or the virtual camera itself may be moving along one or more of these axes.)

Defining movement on screen in this way is precise and convenient when working in 3D, but we can use the same language in describing the drawn movement of objects and characters in our 2D world.
Foreshortening of an arm or leg is a way of working in the Z axis because it implies that something in the drawing is extending out or back from the plane in which the character "exists." If you enlarge the foot on the foreshortened leg, you are emphasizing even more the existence of the Z axis--of the depth of the space your drawings depict.

I once did some animation of two pigs--big, cartoon hogs, actually--dancing in a circle on a small table that eventually collapses from their weight. This was part of a TV ad for the Oregon State Fair. It was funny and pretty effective, and everyone seemed to like it, but now when I look at the drawings I see where I could have made better use of the Z axis.


Well, you can never go back and redo animation after it is broadcast. It is what it is, for all time.
But you can learn to look out for opportunities to improve as you work on new things.

I just finished a new scene for my film Carry On. My Old Man character, having in the previous scene (as seen in post No. 149) managed to get his legs out of a taxi and become prepared to stand up in the street, is now seen in closeup as his head and shoulders rise into the frame and he looks about.

After a hold as he looks off to the right (his left), he turns and looks back the other way. To begin the turn and bring him out of the hold pose, I naturally wanted some kind of anticipation. Instead of having him swing to the right before going left, I have him mostly pulling back from the camera, then coming forward again as he changes direction.


This is deliberately utilizing the Z axis, and I think you will agree, it makes an effective anticipation. Since the Renaissance, artists working on flat, two-dimensional surfaces have known how to suggest depth in their drawings and paintings. Animators should be mindful of these possibilities too.

Posted by Jim Bradrick at 12:13 PM No comments:

Once again I got a chance to view the animated shorts in advance of the Oscar ceremony.  Here are my reviews. 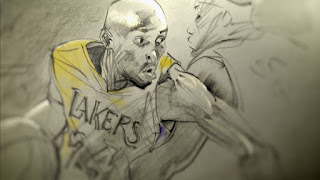 Here, Glen Keane and composer John Williams, best known for his scores for Star Wars, collaborated with Kobe Bryant on a sentimental homage to the sport of basketball as it affected his own life and fortunes. Keane's hand-drawn animation, always a pleasure to look at, nonetheless cannot elevate this maudlin film without a real story arc to anything of much cinematic interest. Two stars. 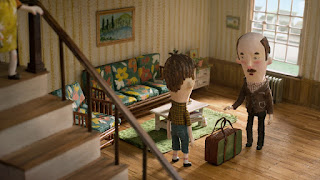 A quirky, funny little story depicted in what appears to be stop-motion animation (though it is sometimes hard to tell these days) about a man who takes pride in knowing how to properly pack a suitcase and his relationship with his father. Delightful, with clever transitions and a lot of graphic surprises. Four stars. 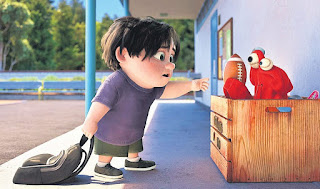 Pixar's entry has a lot of razzle-dazzle computer animation, as might be expected, and a small story about bullying on a children's school playground and a character assembled from the contents of a lost and found bin. Three stars. 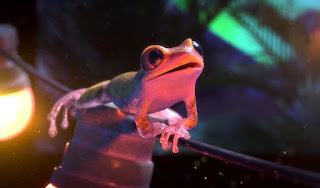 This film about a mysteriously abandoned  mansion that is gradually taken over by a troupe of amphibians from nearby who unwittingly reveal its secrets. Excellent computer animation, but above all an engaging storyline, all accomplished without dialog. Four stars. 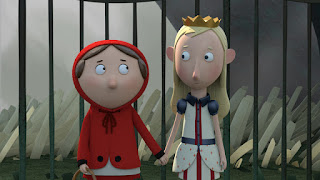 Another Raould Dahl story brought to animated life, Revolting Rhymes conflates Red Riding Hood, Snow White and the Three Little Pigs into one dark but hilarious storyline.  Computer animation that sometimes looks like stop-motion; possibly another hybrid.  And there is even a suggestion of romance between Snow White and Red!  Four stars.

There they are.  But if you are interested in glimpsing some of the entries that didn't make this final cut of five, just take a look at this blog post from Amid Amidi's blog Cartoon Brew. You will see trailers, stills or--in a few cases--complete versions of over sixty films trying for the Oscar gold. Some of them are dark subjects, and many are in unfamiliar styles that the average viewer of Hollywood cinema might find uncomfortable. But they all are winners of film festival prizes, and all deserve attention.  It is a reminder that the possibilities in animated film are wide and deep, and the limitations few.
Posted by Jim Bradrick at 4:01 PM No comments: