I have been asked by Tim Rauch to help get the word out about the Kickstarter project "Mushroom Park". This is not only animated, it is hand-drawn, without any 2D puppet animation as far as I can see. The Rauch Brothers animation is loose and lively, a pleasure to watch.  Looks to me like those guys are acme punched for sure!

As you know, Kickstarter requires that a project be pledged the full stated amount by the deadline date, or they get: NOTHING.

In the first sequence of my film Carry On, I want to establish not only how impossibly big the Old Man's trunk is, but how heavy as well.

My opportunity presents itself early on, when the trunk, having arrived at the airport entrance projecting from the boot of a taxi, has to be lifted out and set upon the sidewalk. Here are the storyboard panels for that action.


So perhaps you see right away the animator's problem here: it's what isn't being shown. We don't see the trunk being lifted, and we barely get to see the taxi driver at all. The audio will help out; there will be some grunting and groaning, and there will be a loud impact sound as the trunk hits the concrete.

But I was worried about trying to animate only the parts of the taxi driver framed by the camera here.

Solution? Animate the entire movement in rough drawings from beginning to end, just to make sure that I am really understanding all the physics involved.

It wasn't that hard. First I did a page of thumbnails: 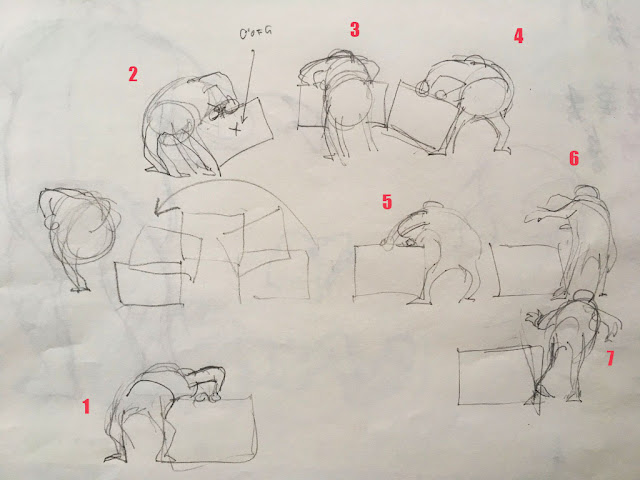 Then, in little more than an hour, I banged out this test animation.


It is silent, it is missing a lot of detail, including squash and stretch on the trunk and some drawings that will be on ones, and yet it puts across the impression of tremendous weight. Even with the right half of the image masked off--the way it is framed in the storyboard--I can tell that it will work.

Next: I will go ahead and do final animation of the above action, and we will see if my confidence is misplaced.
Posted by Jim Bradrick at 11:04 AM No comments:

Continuing our work on scene 1-8, we continue to delve into...


Upon finally seeing the test with all the drawings in, I was not happy with the arm and hand movement. I had tried a very loose and gangly style, which I could now see was more appropriate for Art Babbitt's Goofy than for this old man. I could have just tried damping down the floppiness of the hands, but I thought that he might  look good with an entirely different style, sort of gliding his hands back and forth with half-closed fists and with an elliptical pattern to the movement.

Here is how that came out.


Again I was disappointed, as the elliptical cycle was too pronounced. It gave off an impression of self-consciousness that was wrong.  That is, the Old Man appeared to be aware of his own hands, which is not the effect I wanted.  But I still liked the concept, so I simply flattened the ellipse, lowering the hands as they came forward.

Here is the pencil test with that correction.


I feel that this works well now.  At the end of the scene, I also show his left elbow backing up; this makes a nice anticipation for the forward movement of his left hand onto the trunk.

Pencil tests are so easy and fast to do, there is no reason not to do them. Nor is there any shame in it. Traditional animators are in the business of making something look alive out of a series of closely related images that are not alive. Much can be learned by experience, but the experience and the received knowledge from books and instruction are only aids that will help you to get close to what you want. For anything truly original, pencil testing your work and studying the result is the best way to get your animation to closely match the vision in your mind.
Posted by Jim Bradrick at 10:15 AM No comments:

Time for another episode of...

The Old Man Walks In and Stops


This is a short scene where the steamer trunk is sitting on the sidewalk; the Old Man walks up to it, stops, and places his hand on the top.

I have previously animated the Old Man twice in a walk.  In the first, the walk is lopsided and under constant strain as he is dragging his trunk along behind him. In the second, he quickly walks off screen. This time I will show him full length, including his feet, so I am establishing a style for him that is to be his normal walk. 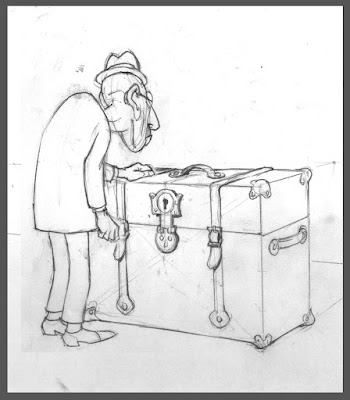 First I determined that it should take him 4 steps to get him from the starting pose to the end. Then, thinking that an old man might move slowly, I decided each step should be 16 frames, a little longer than the average 12 frames per step. Blocking that in, with only the contact and passing positions drawn, I did this first pencil test with 8 exposures per drawing; thus, with only 1/4 of the drawings done, I can nevertheless evaluate the rhythm of his steps, since each step is already at 16 frames; the timing is the same as the final animation will be.

This shows me that the general timing works and also that the mass and perspective are consistent and convincing.

The arm and hand movement here is experimental and, as you will see, required some more thought, but at the time of this test I was happy with it.


This looks like a good time to review what is meant by Contact and Passing positions in a walk.

If you want to do a character walking, where do you start? Well, you start with an extreme, a drawing that illustrates the instant when an outstretched foot touches down to the ground: the contact position. (There are animators who prefer to start with the passing position, which is the point halfway between the left and right contacts.) The passing position tends to be undramatic as a silhouette, with one leg passing in front of the other and with both arms more-or-less even with the body. The passing position is the breakdown between the extremes of the left and right contact positions. 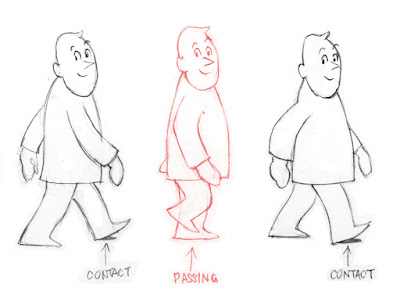 
Not a Standard Walk Cycle


Note that this walk is not a repeatable cycle since the Old Man is turning as he walks and the drawings could not be properly looped. A good working method here might be to first do an actual repeatable cycle as a reference, then extrapolate from those drawings as the camera or the character turns in perspective. I did this once with a running character where the effect was that the "camera" swooped up and over the runner until we were looking straight down on him.  It worked, but in this case, with just a small turn involved from 3/4 front to 3/4 rear, I felt I could do it without that preliminary cycle.


Next I filled in one drawing between each existing pair. I now make a new pencil test, exposing each drawing for 4 frames, which maintains the same timing as before. Here is a section of the pencil test exposure sheet for both the first and second tests. (With my pencil test software, Toki Line Test, I can put all the versions of the pencil test into one file, with each version on a new layer. All layers except the one I want to view or to output as a Movie can be turned off. Probably this is possible with other software as well.)

Here is that second test.


Everything still seems to be working, so I push on and add all the remaining drawings. For the walk, that means one more drawing between each existing pair. (The section at the end of the scene, after he stops and when he places a hand on the trunk, is more complex than this.)

It is time for a third pencil test, and now that all the drawings are in, we shall have a complete idea of the movement, even if some drawings are still quite rough.


Here again is a part of the exposure sheet, with this test represented in column C.

So much for the system. What do we think of the pencil test, though? Hmmm. Not so good! I am perfectly happy with the legs and feet, but not so much the action of the arms and hands.

Next: Fixing What Is Not Right

Posted by Jim Bradrick at 4:56 PM No comments: