I have mentioned before how the animator as storyboard artist might often put more into the storyboard than an artist who does not animate would do. But when it gets into actual animation, that animator will then go deeper still.

Things occur to the animator as she or he contemplates and then works on a scene--things that will not have been thought of. 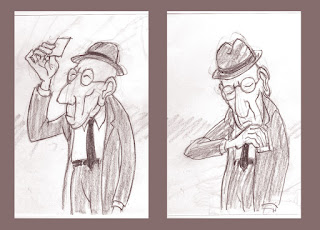 Take the first two storyboard  drawings from the scene we have chosen. They show the Old Man having caught the card out of the air, then inserting the card into his breast pocket.

But let's look at everything that that will entail in my animation.

He catches the card.

He looks at his pocket.

He aims the card.

He inserts the card into the pocket.

The finger comes up to tap it in.

He taps it all the way in.

Could this have been done more directly? Might I not have just used the two basic poses from the storyboard and been done with it?  Of course I could have done.

But that is basically the difference between full animation and TV animation. The proponent of full animation always is asking himself, "How can this be improved?  How can it be made interesting?"

Naturally, as one working on my own personal animation project, I have the freedom to indulge myself. There is not much 2D animation being done today that permits such extravagant expenditure of drawings, time and money. Only in CGI animation will you find such lavish attention to this kind of nuance.

Special Note: You will see from the framing of this scene in the storyboard that the legs and feet will not be included in the shot. But I have drawn them in because the Old Man will turn and walk out of the frame, and so I need to know where his weight is and what his stance is. Even standing with his feet in one place as in these drawings, he is still balancing and shifting his weight about, so it is important to draw him right down to the ground if possible.


Next: The Pencil Test for the Whole Scene--wait for it!!
Posted by Jim Bradrick at 11:08 AM No comments:

Confronted now with the prospect of animating all the many scenes I have storyboarded, the question of priority presents itself.  How do I do this? Do I pick my favorite scenes and do them first? Do I start at the beginning with Sequence 1, Scene 1, and work relentlessly straight through from there?

First of all, I can eliminate for now any scenes with dialog except for those few in which final voices have been recorded. This is of course because the timing depends not only upon the timing that the actors will determine, but also upon any useful movement and expression that their characterizations may suggest.

The answer to the main question was defined for me by Nancy Beiman in her book Animated Performance (AVA Publishing SA, 2010).  "Animators have the most time and energy at the beginning of a production," she writes. "If the most important and complicated scenes are done first, they will be done (and done well) when the animation is completed."

Beiman goes on to recommend ranking all scenes as A, B or C.  "An 'A' scene is one that is vital to the storyline and usually contains the most complicated animation.

"A 'B' scene is still important to the storyline but may be a simple one-character shot rather than a two-shot with dialog. Since it will take less time to animate than an 'A', it will take second priority in production.

"A 'C' scene has lowest priority and may be eliminated if the limitations of time and budget intervene in the production, as they often do. 'C' scenes may still be necessary for the story but they can easily be modified or shortened if required."

In all my reading about studio production, I cannot remember ever before hearing about this very sensible system of prioritization.

For my first scene to animate, I have chosen one of the Old Man doing a little private victory dance. It isn't an actual dance, but his smile and his body language indicate that he has just scored a win and is feeling good about himself.

Here are the four panels that illustrate the scene in the storyboard.

No. 123, The Empty Wall: Approaching an End to the Storyboard Phase

For months, my storyboard pinup wall has been covered with storyboard panels--not just one set of 40 or 50 drawings, but waves of them, one after the other. My wall holds about fifty drawings at a time, seven rows of seven panels each. Some sequences took more than two sets of fifty drawings to tell their stories. It has gone on and on, and at times it seemed like there might be no end to it.


But now it has ended, and my wall looks like this, studded with pushpins that have nothing to support but themselves.

But though I am about at the end of making drawings for my storyboard, it isn't the end of the storyboard work. Now I have scanned all my drawings and imported them into Storyboard Pro to create an animatic for each sequence.  This involves a lot of copying and pasting of layers, of making determinations for the duration of each panel in a scene, and of the addition of camera and layer movement--zooms and pans and rotations. Then there is a scratch track to be built, with dialog and sound effects and even some music to try to approximate what the finished film will feel and sound like.

And then? I will stitch the seven sequences together as a Quicktime movie and send it out to several friends for them to review. In the meantime, I will start on some actual animation of scenes without dialog.

Actual animation--I can barely believe it!

Posted by Jim Bradrick at 1:20 PM No comments: