As blogs go, Acme Punched! has only a small following. But, you are from all over the world! My stats show me that I have readers in Brazil, Ukraine, South Korea, Columbia, Egypt, Israel, Portugal, Australia, Indonesia, China, Great Britain, Sweden, Sudan, Saudi Arabia, India, Nigeria, and on and on. All the populated continents and all the island nations have people interested in hand-drawn animation, who have looked at my blog.

To me, it feels nothing short of awesome. Thanks for listening. I will try to keep doing this. To all of you I wish happy holidays in this time of the winter solstice (in the Northern hemisphere, that is!) and in this year-end time of renewal.

I wish for all the people suffering in the troubled parts of the world, in Yemen and Syria, in Iraq and Afghanistan and Nigeria, in Sudan and Pakistan, in Somalia and Ukraine and the Central African Republic, and in all places which are troubled by war and privation and the natural ravages of weather and earthquakes--I wish for all of them to have something to make them happy in the coming year, or at least to make them secure.

Here's a cartoon to make you laugh. 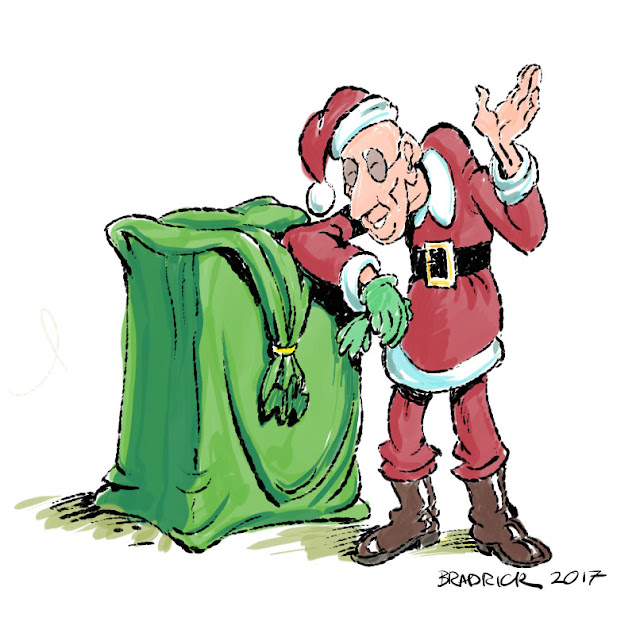 Best wishes for the New Year!

--Jim Bradrick
and Acme Punched!
Posted by Jim Bradrick at 10:31 PM No comments:


To disembark from a train is to detrain, so I am thinking perhaps detaxi might work for getting out of a car for hire.

In any case, we are getting my Old Man character out of his taxi in this next scene. He has arrived in front of the airport, and this scene is just before the one of the taxi driver moving the Old Man's trunk, which we looked at in posts 142 and 144.

Here are the storyboard panels for the scene. 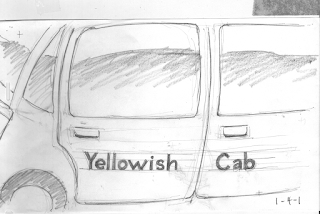 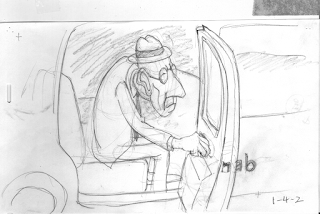 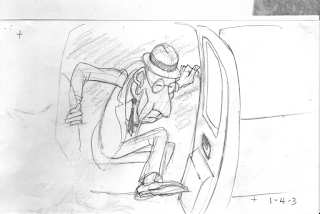 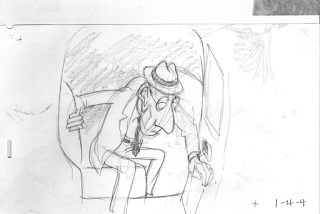 By the time it came for the animator (me) to begin the key drawings that would supplant these panels by the storyboard artist (me), some things had changed.  I had done careful layout drawings of the taxi with its interior, and animation of its door opening. And I had done a lot of thinking and study about what the action should look like, not excluding my getting in and out of the back seat of a car a number of times.


I decided I wanted both to show that the Old Man, though somewhat deformed in his back, had a lot of agility in spite of his handicap, and that getting out of the back seat of most cars is unavoidably awkward. (We are not thinking of older taxis from previous decades that were designed with extra leg room in the back seat.)

Here are some keys and extremes.


A couple of pose drawings came hard to me, but I kept after it and they did finally get resolved.

Next I got them down on the exposure sheets, doing my best to time them out accurately so that they could be assigned drawing numbers and spacing guides. I have not always done this at this stage in animation but it is useful to learn to work out timing with a metronome beat or a stopwatch as I imagine each move from extreme to extreme. I own a classic wind-up stopwatch, but a digital stop watch is a standard feature on many cell phones. There are also a number of metronome apps that can be downloaded free.

Here is a pencil test of the whole scene, first a rather dim version with two layers exposed, so that you can see how the character relates to the taxi.


And now, the same business with the character alone.

You can see that there are still some drawings missing, but it does look like it is working.
I will soon post the full pencil test, but not until after the first of the year.

To answer the question posed at the end of Part 1 (No. 142, A Weighty Problem, Part 1), I believe that the animation works as intended.

The problem was that a beefy man, the Taxi Driver, was to pick up and move the Old Man's trunk, showing how very heavy it was. But the staging I had chosen did not show all the action--did not show the effort of the Taxi Driver lifting the dead weight of the trunk off the ground.  The severely cropped staging was chosen to emphasize the trunk's size, and also to startle the viewer when the trunk is unexpectedly and violently set down to almost fill the screen.

But I was betting that the scene would work anyway if I carefully animated the Taxi Driver's effort in moving the trunk. Also I was counting on sound effects--the grunting and the impact of the trunk being set down hard--to help put across the man's effort.

Here is the final animation...

The right border of the screen is cropped in this pencil test at the same place where I intend to crop the finished shot. (See the storyboard panels in post 142.) As yet, there is no sound at all, but I am happy to see that the animation still has the power that I hoped for.

Sometimes now, I actually get things right on the first try.

Next: All About Getting Out of a Taxi
Posted by Jim Bradrick at 9:50 PM No comments: