No. 6, My 10 Favorite Animation Instruction Books 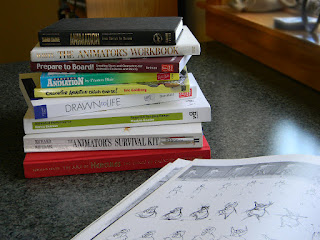 Let me first say that though I do have an extensive library of animation books in English (over 120), there are some that I don't own and have not even had a chance to examine.  But lists like this are inevitably subjective, and so these are the ones that have proven most valuable to me,  in chronological order and with a brief explanation of why each book was selected:

1.  Cartoon Animation, by Preston Blair. c1950, 1980
I recommend the 1994 edition which combines Blair's two famous large-format books into one, with additional new material.  Lushly illustrated with late 40's-style Hollywood character design and many beautiful examples of character animation often taken directly from films on which he had worked, the book is inspiring and clearly laid out.

2.  Illusion of Life, by Frank Thomas and Ollie Johnston. 1981
This is a textbook disguised as a coffee table book, and though its arrangement is historical and quite unsystematic in terms of instruction, the lessons are in there if you watch for them, and they are pure gold.  Frank and Ollie were college chums, neighbors, partners in everything throughout their lives, and they packed this book with everything they thought might be helpful from their particular viewpoint as veterans of the Disney studio from the mid 1930's until their retirement in the 70's.

3. The Animator's Workbook, by Tony White. 1986
A veteran of Richard Williams' London studio, Tony White actually got many techniques and principles into book form years ahead of Williams, and he included other tips and tricks I have encountered nowhere else.

4. Animation from Script to Screen, by Shamus Culhane.  1988
Culhane was a talented animator and director who worked at Disney, Warner Bros, Fleischer and Lantz before becoming an independent producer, and he  tried to put everything he knew into this book, which unfortunately suffers from a small format that does not do justice to the illustrations.

5.  The Art of Hercules,  by Stephen Rebello and Jane Healey. 1997
I have several Art of This, Art of That books, but this one I find myself going back to again and again. The process of character design that is recorded here, beginning with the bizarre yet graceful imagery of Gerald Scarfe and working toward a style that was both distinctive and workable in animation, is a fascinating journey.  Also includes a lot of animation drawings, both cleanup and rough, which are always a delight to me.

6.  The Animator's Survival Kit, by Richard Williams. 2001
Already a designer and draftsman of stature, the author became obsessed with learning animation  and hired a number of great Hollywood veteran animators to work on his films and, along the way, to teach him and his staff what they knew.  His book is an exhaustive distillation of all that lore, plus additional material from his own experience.

7. Prepare to Board, by Nancy Beiman. 2007
Just when I had concluded there was nothing more to be said, this former Disney animator showed me how wrong I was with not just one but two books full of lore, advice and lucid instruction. This one is about effective storyboarding rather than animation as such, yet the two disciplines are inextricably related, and for the independent animator, Prepare to Board is a must-have.

8. Character Animation Crash Course, by Eric Goldberg.  2008
By the animator of the Genie in Alladin and Phil in Hercules, this book is most notable for its demonstrations of the power of the breakdown drawing and also the "punch" that can be imparted to a movement with sudden transitions.  Includes a DVD illustrating every example in the book.

9.  Drawn to Life, vols. 1 & 2, by Walt Stanchfield, edited by Don Hahn. 2009
Compilation of illustrated lecture notes from gesture drawing classes given by Stanchfield at the Disney studio over a 20 year period.  I use these books as a kind of daily devotional, reading only one or two entries a day.

10. Animated Performance, by Nancy Beiman.  2010
Ms. Beiman's second book goes where no author has gone before in terms of laying out the planning behind great animation, and her solid teaching skills combine here with deep knowledge of feature animation to produce a volume full of insight and also some facts I have found nowhere else, such as the difference between a Scene and a Sequence.