No. 183: Man Takes Picture with Tablet

Sometimes the simplest things can be the hardest. Overt action in animation happens to be easier than being restrained or subtle. I had to do a second try at this little scene before I got it right. 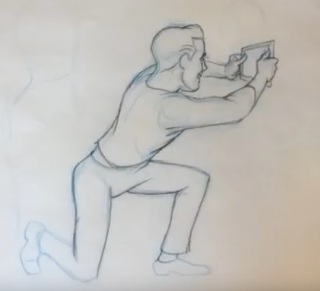 This young man, fascinated by the doings of my Old Man character in line in front of him in the airport luggage inspection line, has gotten down on one knee to take a picture with his tablet. We see him raise the tablet into position for the shot.

At first I had him look down and pull the tablet slightly toward his chest before going into the full extension extreme at the end.  But this turned out to be too much movement for this anticipation. I ended up keeping his head steady and moved only his pelvis back a little as he prepares to lunge forward.

One has to keep in mind the importance of the shot.  It makes the point that people are watching the Old Man with varying degrees of interest, but it doesn't take center stage really.  (In the shot, other passengers will be shown around him.) I now feel that I got the right movement in this shot.

See what you think: