How Long Is the Scene?

The screen duration of many scenes is easy to determine. If your character is doing a certain bit of business before the camera, then the time it takes to perform the action may give you your answer.  If it is based on dialog, then you have another easy guidepost to determine the length of your scene or shot.

But what about a scene with no clear beginning or ending? What then determines how long it should last? Such a problem is confronting me in Scene 7 of the sequence of my film Carry On. This is where Miss Hopegood first crosses paths with the Old Man and his Suitcase.  The camera is facing across a long corridor in which the Old Man drags his case to the right, while Miss Hopegood passes in the opposite direction, moving to the left.  In the next scene, she realizes what she has just seen, and she goes back to try to help him (whether or not he wants her help.)

I originally boarded this scene in three panels, with the camera traveling along with Miss Hopegood, keeping her centered in the frame, while behind her we see that she is moving past the Old Man. The background of the corridor, of course, is also slipping along toward the right.

Here are the 3 panels: 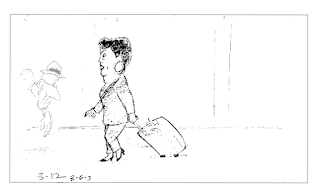 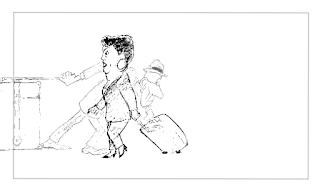 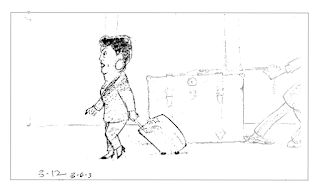 I timed this out to last three seconds or so.  In SBP I originally gave it 3 seconds, 20 frames, or 92 frames and just under 4 seconds for the three panels.

It seemed to play well enough in this form, but I realized that I could get a better idea of it by making the three panels into one and animating both the Old Man layer and the Background layer in motion to the right.

This involved separating the character elements from each other and from the background, each on a separate layer. With all the negative space being white, it was impossible to clearly see what was opaque and what was transparent, so I added an extra layer at the bottom of the stack which was colored a solid blue.
Next I created a new background layer on which to create a moving vector background.

I did all this but then found that it worked better if the scene lasted about 6 seconds.  Here is the result, with a few scenes included before and after to show the context.


I have made many other changes to my animatic of Sequence 3, adding refinements and effects to better approximate the final vision, which in turn allow me to make more assured judgments in the timing of all the shots. Changes include:

--Simple animation of layers from left to right (or in the X axis), such as a character moving across the screen or a background.

--Layer animation of characters/vehicles, including scaling, to show these things moving in perspective

--Transitions such as cross dissolves

--Camera moves that clarify the action

There are many other refinements that could be added, but I am trying to limit the embellishments to only those things that would help put across the story more clearly; if a single still panel is effective, then to animate their elements in the animatic is not worth my time and trouble.

Here is a link to the revised animatic.