Some of you may recall that we did this once before, in posts 36 and 37. Recently, in the course of my work on a new casino video game, I encountered another problem where the breakdown had to be an eccentric one in order for the scene to work at all.  That is, a straightforward half-way inbetween would not work; either the extremes had to be re-thought and re-designed, or else a solution would have to be found at the breakdown stage.


First let's review the nature of the breakdown drawing. In the process of pose-to-pose animation, breakdowns are the next step after the extreme drawings are done.  A skilled assistant may do them if there is nothing out of the ordinary, but as Eric Goldberg has pointed out so skillfully in his book Crash Course in Character Animation, the animator may often want to do the breakdown him or herself; it is his chance to weight the movement more toward one pose drawing over the other, or to otherwise add extra character to the movement.  The breakdowns are thus capable of being as critical to the final effect as the pose drawings or extremes, unlike the inbetweens which are more mechanical, less creative, and generally capable of being rendered by a far less experienced assistant.


Here I had a scene where the main character of the game, a mischievous villain who is always trying to interfere with the game's players, throws a big knife switch on an electrical box and turns out the lights.

For this game we were under considerable constraints of time to get all the animation done, and so I had established a style of very rapid movement from pose to pose, often using smear or blur drawings. [There will be more about this in a future post.] But here and there, to emphasize some particular movement, I utilized more drawings in the movement to make the action especially clear.

Here are the two pose drawings we are concerned with. 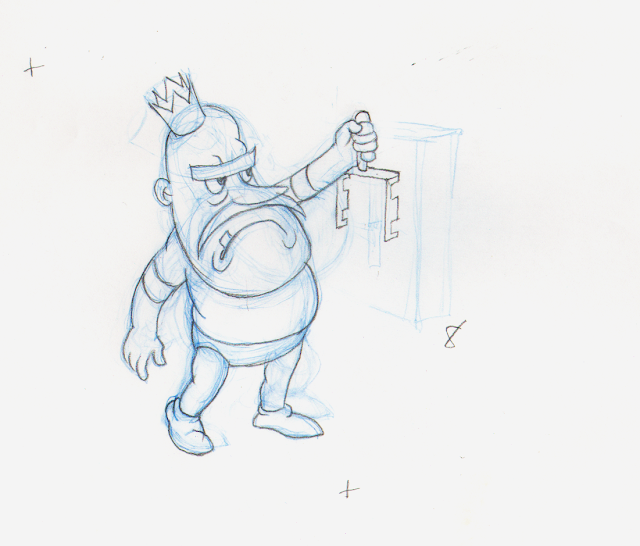 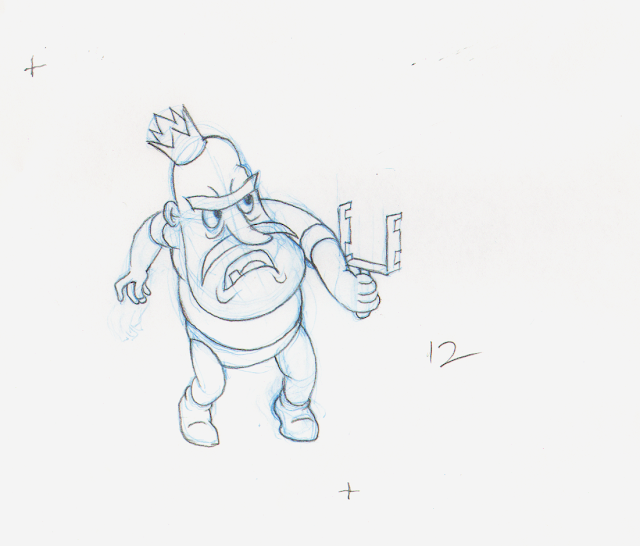 As soon as I began on the breakdown between these 2 poses, the problem became apparent: the handle of the switch when it is half-way down projects far out to the left, interfering with the character's head and body [Figure 1].

With a little experimentation, I did figure out a way to solve this problem--without altering the pose drawings A and B.

I invite any of you to take a shot at it.  If you want to give it a try, send me an email to: bradrick@olypen.com, and I will then send you the two extreme drawings above as jpegs for you to print.  Take the printed drawings and tape them each to a sheet of animation paper, so that the registration crosses are in alignment.  Then make your version of drawing 10 on a third sheet of paper.  Remember to trace the registration crosses onto your new drawing.

Your challenge is to show the switch halfway down while making it work with the character poses as a convincing breakdown pose.  Remember, their may be more than one way to make this work; my way is just the way that occurred to me.

Send me your result as an email attachment, and I will either comment privately or in the blog, as you wish.

I will show you my own solution to this in a subsequent posting.