In 3D animation, the frame or image numbers are counted for you, more or less, so if you make a change in timing, your computer just resets the numbers.  (Haha! If I am wrong about this, I expect some of you with more experience in 3D than I have will set me straight.)

Animating on paper, your drawings must be hand-numbered and those numbers must be entered on your (paper) exposure sheet. Later on, beyond scanning, your pencil test or animation program such as Animate Pro will track further changes. Before that, however, it is pencils and erasers.


I confess that I have to use erasers for renumbering quite often. It is a simple matter of lack of experience. Perhaps you find that surprising, but my career experience compared to that of, say, a Ken Harris at Warner Brothers, is insignificant.

Consider that a Hollywood studio animator in the 1940s or 1950s would turn out up to 30 feet of animation a week. That's 20 seconds. He was responsible only for timing and extreme and breakdown drawings, and for making spacing guides for his inbetweener. In some situations, timing was already worked out by the director. And the animator worked at this week after week, year after year.  It got to the point where such an animator would look at a scene and know instinctively and accurately how long a hold should be, or how short. Thousands of career hours "on the board".

Compare that to the independent animator like me, who also has had to perform all the other job titles that animation production entails--storyboarding, layout, inbetweening, digital ink and paint (and, oh yes, actual ink and paint on cels until the 1990s), background art and camera  work--and you can see that my actual time spent "on the board" doing animation was but a small fraction of my total effort. What would be my footage count in a week? Averaged out, it would certainly be less than one foot.

Factor in also all the down time: time spent looking for new accounts, time waiting for contracts to be signed, time working at some day job when the animation work just wasn't there.

Is it any wonder that for all that I do know, I sometimes get it wrong when I try to time out in advance how long the Old Man should gaze into the darkness of his trunk before turning back to look at the guards? Not enough flying time; not enough hours "on the board."

Thus, I erase, renumber drawings, and sometimes have to renumber them again.  I elect to use a 12-frame hold, then see in pencil test that 16 or 20 frames is better. Some other hold is too long and gets shortened.  Yes, it is mostly changes in the duration of holds that causes my numbering changes. I need more experience "on the board."
But I'm working on that.

[Note: I use the Disney numbering system which links the drawing number directly to the frame number in the scene. Thus, if you add or subtract drawings or change an exposure length, all the subsequent numbers are thrown off. This is, admittedly, an awkward system for someone not yet sure of all timing.]


And while I'm on the subject of timing, let me tell you about...

The Hold that Isn't There


Before continuing, please go back to post 138 and play the video again. Look for the part where the Old Man, after himself looking into the trunk, straightens up a bit and looks back to the right before plunging his hand in to get the cylinder.

Do you see the hold there?  Right at the top of the action, right before he turns back to the trunk? No?

Well, there was a hold there. It was just 6 frames long, right on this drawing here.


I had been very deliberately experimenting with a moving hold there, getting the Old Man's head turned early in the move so that the pose of him looking to the right would read without actually holding on one drawing. Then, before testing it, I lost my nerve and added in that 6-frame hold. (Which affected the numbering from that point on.)  It did look okay that way, but later, remembering my original idea, I took that hold out--reducing the exposure on that drawing from 6 frames to 2, actually--and found that it still worked quite well. 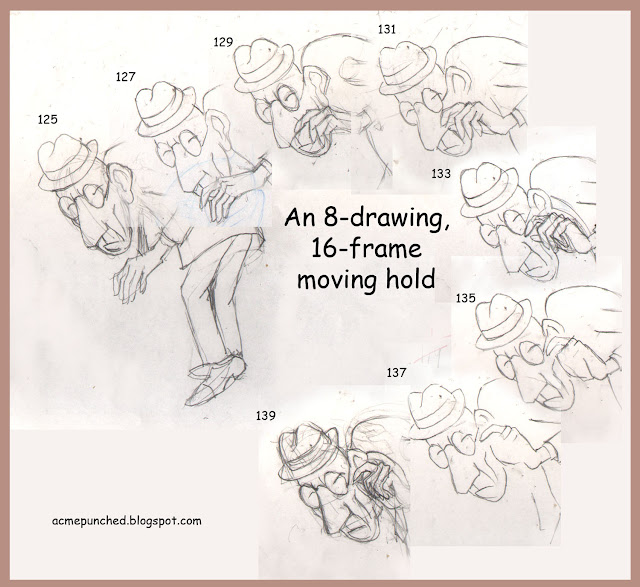 Lesson learned: with 8 drawings or sixteen frames, closely spaced, all showing his head looking to the right, no actual held drawing is necessary. What about 14 frames or 12 or 10? Will the pose still read? Maybe. Every situation, every animation scene, is different. You can always do a pencil test.