No. 127, A Worthy 2D Kickstarter Project 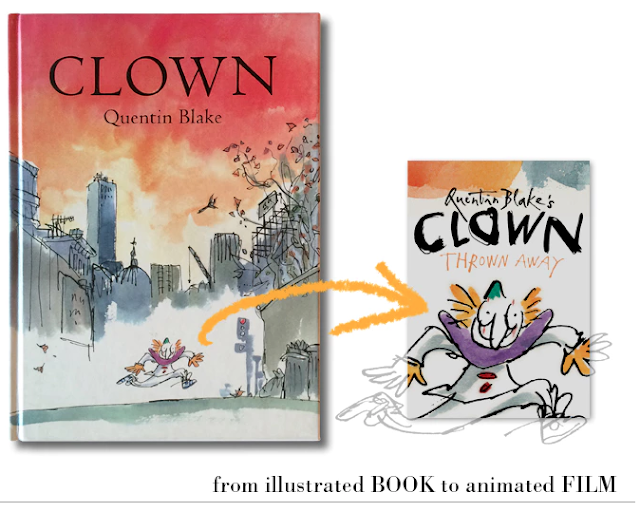 There is a little 2D animated film that wants to be made which deserves support. Clown: Thrown Away, based upon a children's picture book by Sir Quentin Blake, is now up on Kickstarter with only 24 days remaining in which to make their quota. I have been asked to do what I can to publicize the project and encourage everyone to subscribe and make it happen.

On Kickstarter, unlike some other crowd-funding sites, it is all-or-nothing; either their stated goal gets pledged by the deadline, or else no funds are collected and they are back at zero.

This is an exciting and worthwhile production for a number of reasons. First, the charm of the style. The illustrator and author, Quentin Blake, well known for illustrating his own books as well as the stories of Raold Dahl, renders his cartoons in a loose watercolor and ink style that the producers intend to translate onto the screen. This is a difficult idea but will be exceedingly charming if they can bring it off, and there is every reason to think that they can.

Second, the story is all in mime, which makes it universal, not dependent on language or translation no matter where it is shown.

And the story is also a universally appealing one, of courage and organization, sadness and joy, and of bravery and optimism.

Here is the link to the Kickstarter page:  www.letsmakeclown.com

Support 2D animation by supporting this project, and please spread the word now!

*   *   *   *   *
Update, May 15, 2017
I am sorry to report that this Kickstarter effort failed. Having only raised pledges amounting to about a third of the stated goal, the project was withdrawn. Unfortunately, due to the vast number of projects vying on the Kickstarter website for attention and money, many worthy projects, even those having obvious appeal and well-thought-out pitch videos and donor enticements,  do not get fully funded--which, on Kickstarter, means they do not get funded at all.
Posted by Jim Bradrick at 3:19 PM