No. 116, Maquettes, Physical and Digital

My Need for a Maquette

Sometimes as a 2D animator who imagines his characters in three dimensions, I have resorted to creating a maquette when confronted with difficult angles or points of view. Maquette is a French word to describe a small scale model or sculpture, usually employed as an aid to the creation of a larger work of art. It is a sketch in 3D.

Sculptors like Rodin created maquettes in clay of some of their concepts before carving them from stone on a much greater scale. The pioneering architect Brunelleschi made a model of his great duomo which became a guide for his workmen as they built the famous landmark church in Florence. (The maquette was also useful in making a sales pitch for an elaborate project to a pope or cardinal or to any rich patron.)

In animation, by the time of Snow White in the mid 1930's, the Disney studio was creating  and distributing to animators scale models of their characters for reference, a practice that was continued until the advent of CGI modeling.
The digital model for animation didn't only make the creation of physical maquettes obsolete for their all-CGI productions; it also eliminated their original purpose in animation, which was to go beyond the paper model sheet in offering to the animators a reference for drawing the characters at any imaginable angle. Henceforth, once the character model was finalized in three dimensions in the computer, no one ever had to worry about drawing the character again, or about staying "on model". The character had only to be manipulated like a flexible puppet, and there was no longer any danger of it looking "wrong".

Meanwhile, I, with other die-hards including some of you readers, remain out here in 2D world, wanting anachronistically to still do it with a pencil or a stylus. In our world, the maquette continues to be of real use.

One can get into trouble drawing rigid objects that must turn and twist in front of the camera without looking like they are changing their shape or their relationship to other features. An accurate maquette can make all the difference in creating convincing animation of spatially challenging structures like noses, hats and chins.  The more complicated the shape, the harder it is to render effectively.
Just now I have a character design which is giving me some problems when I try to draw him from certain angles. Here is a selection of drawings of the character, Kevin.

Kevin is an obnoxious character.  I want him to be amusing but not sympathetic, so I have deliberately made him weird looking, even a bit ugly. His large keel of a nose gives him a birdlike aspect, and his eyes, instead of being above the nose, are down along either side. This creates a design problem: certain angles of his face need to be avoided because his nose can completely hide the eye on the nose's far side.

You can see here that the Old Man has an equally large nose, but for two reasons it is not a problem. 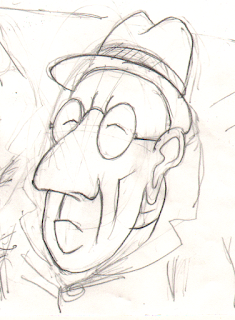 With the eyes placed above the large part of the nose, you can still see them no matter which way his head is turned.  Also, this character, an elderly gentleman, is far more restrained in his movement than Kevin, who turns and tosses his head about every which way as he speaks.

The difficulty of drawing Kevin will definitely be alleviated by a maquette of some kind. In the past I have made little maquettes from various materials, including paper.

In the case of character maquettes, I use Sculpey, a modeling material that can be hardened at temperatures within the range of a home oven.  However, if I am only wanting a temporary model to use while I draw, or to help me with drawing a model sheet, I sometimes do not bother to bake it.  The Sculpey material remains pliable for years.
In preparation for doing my Sculpey maquette, I have made some careful drawings of Kevin's head--front, side and 3/4 views. (The 3/4 view actually favors the front view, since it reveals the offside eye better than a drawing that is precisely halfway between front and side.)

At some point, it occurred to me that these drawings are exactly what I would create for a CGI modeler to use, and I thought: Maybe there is someone out there who would like to model Kevin in Maya or some other application!

Although I have some experience and understanding in Maya, I have never achieved any real facility in the program, and so this is not something I could easily do myself.

So, I am putting it out there as a challenge. If you model Kevin's head and give me the results, I cannot pay you. But if I can use the images, I will certainly give you a screen credit on my film Carry On, and I will give you publicity in this blog for your achievement.  If you are interested, please contact me directly at bradrick@olypen.com, and I will provide you with additional tips and information. If I get more than one response, I will be happy to publish images from every modeler who takes this on.

Meanwhile I will start on my own physical maquette using Sculpey over a wire armature.