Adding the Fox Himself


Last time we saw the fox, he was nothing more than a rough stand-in looking like a bad drawing of a stuffed toy.  Let's see that again:

Thinking about what the fox might do as I looked at this test, I immediately had some wild ideas.  Although I had basically kept the man's head upright and steady, there was some movement and even a little tilt.  This is something I could have some fun with, I thought, and I did a few thumbnails.  Here is one idea: 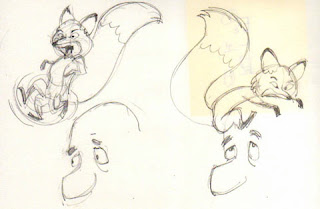 But then I, as Animator, knew what I, as Director, would say.  (It was as if he and I were the same person!)  He'd say, "There isn't really time for this much action, and furthermore, you don't want the fox upstaging the movement of the man.  You have to tone it down, and keep it simple!"  And he would have been right, of course.  Also, I realized that this kind of thing was out of character for the fox, whom I had begun to see as Mr. Cool.  Like Bugs Bunny, this fox is usually in complete control.

I went to work then animating the fox.  There were a few tests and adjustments, because it can be more difficult to animate with restraint than with wild abandon.  But finally I felt I had what I wanted.  Here is the test I next presented to the Director:

So, the fox reacts to the movement, but he remains seated and basically unruffled until the man picks him up.  I thought it was a good solution, and the Director agreed.

"Yes, I think you've got it here!" he said with enthusiam.

And yet I was still worried, because he kept running the test over and over, staring intently at the screen.  Then he started looking at the ending frame-by-frame, until finally he turned to me and said, "There is something you might do..."

"What's that?" I asked, finding it hard to keep the annoyance out of my voice.

"Oh, it's just a little thing, but I think it will be worth doing.  Look, I'll give you a hint.  It's something between drawings 83 and 91 that you could improve. Take a look and see if you can find it."

We sorted out the five drawings he mentioned and spread them on the desk.  They showed the middle of the arcing movement where the man brings the fox down from his head to waist level.  Here they are:

I use the Disney-based system where drawings exposed on Two's are given odd numbers.  Thus, if you saw an even-numbered drawing, like 2 or 4, you would know it was a "One."

"Can you see what I am talking about?" says the Director.

"Let's look at them another way then," he says, and proceeds to stack all five drawings and peg them to an animation board, turning on the light so that we can see all five images at once.  That looks something like this: 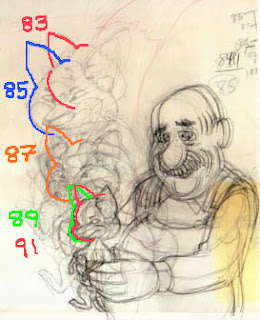 I have added partial outlines in color to make the spacing clear.

"Do you see what I'm talking about now?" the Director says.  "Do you know what you ought to do?"

I smiled, nodding my head, and I went back to my drawing board to do what was needed.

Do you know what the Director was talking about?