If there is one thing that artists in hand-drawn animation do not like to attempt, it is probably the crowd. Doing a convincing representation of thirty or more people moving about is a nightmare, even with the virtually unlimited number of layers that can now be used digitally.

But in setting my film Carry On in a busy international airport, I kept feeling a kind of pressure in my own mind to at least once show a great many people, since no one in a big airport can not be aware of the mass of humanity in motion all around.

I had storyboarded a scene where the camera slowly panned left to right over a file of passengers waiting to go through the security scanners.  But the scene only showed seven people besides the Old Man character, and I thought it was the least effective looking scene in my whole storyboard.  I decided to re-imagine it.

Online I began looking at images of people waiting in airports, and I finally got the inspiration I needed.

The scene opens on a medium closeup of the old man. 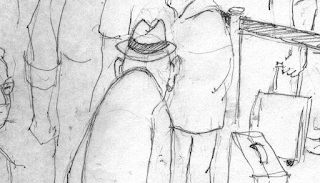 He idly turns his head to the right, so we see him in profile, and then his head swivels back as before. 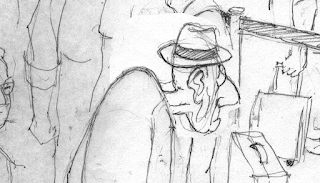 The camera begins to zoom out. 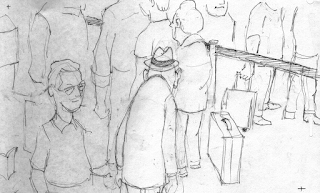 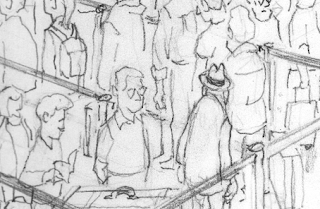 Dissolve to a wider view, still zooming out, until the crowd below is revealed.  Also the ambient airport sound will fade up as the camera pulls back. Then a quick fade out/fade in to the scene where my protagonist is at the head of the security line.

So there is my crowd scene, all done with just a few drawings, but showing how my character had to get in line with everyone else.  And the fact that the people in the crowd do not move is justified; they are merely standing still, waiting for their line to get moving again.