Thanks to Rafael Silva, who in a comment to Post No. 120 (Bring In the Crowds) directed me to the comments of Mark Kennedy on drawing crowd scenes in the blog Seven Camels. The link is repeated here: http://sevencamels.blogspot.pt/2016/09/drawing-crowds.html .

This stimulates me to say a little more about my own crowd drawing, and the three tricks I used to make it effective. At one time I worked for Dark Horse Comics, doing a funny animal series called Wacky Squirrel, among other things. Working in pen or brush and black ink, you learn a lot about how to depict things clearly.

1. All the characters in the first four rows are distinct enough that you can tell which way they are facing.  This was important to show the direction of traffic flow through the maze of the security queue--back and forth, evoking an image of cattle in a slaughter house. 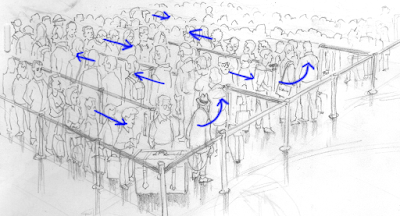 2. Height graduated in waves. This is not what you would normally see in a crowd, but it helps the eye to follow a file of people standing in line so that the progression is clearly seen as a line rather than just a mass. 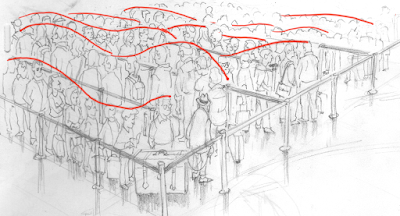 3. Diagonal contrasted with horizontal. With the dominating directions of the lines of people and of course the tapes that separate them being diagonal, the Old Man's trunk being placed horizontally stands out from everything else. I would add that I composed this part instinctually, only realizing later how well it worked! 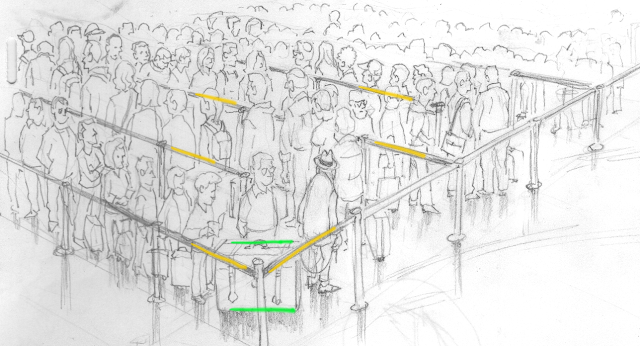