I just re-learned something I have really known for a very long time: that working out your thinking in thumbnail-size images is a smart way to go, whether you are animating or planning out your storyboard.

Sometimes I start storyboarding in full-size panels, which can work, but which sometimes results in having to do over a number of panels because of poor planning. Then I just feel foolish, and that is when I remind myself of the value of thumbnailing. 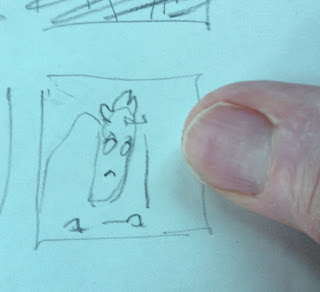 Thumbnails are drawings so tiny in scale that it is impossible to get in any detail. That is the point! Working in thumbnail size, you can work fast and lay down an idea for a whole scene or sequence in perhaps a minute or two. Often you will reject some panels and replace them with others, but the effort in redoing thumbnails is nothing compared to replacing larger images in which you have invested a lot of time and work in detail and accurate drawing.

An important bonus also is that you can draw crude thumbnails as fast as you can think. This happened recently when I had been working at the staging of a difficult sequence for my film Carry On.  When the solution occurred to me, I sat down and thumbnailed the whole thing in a couple of minutes.

Here is the original page of thumbnail notes, telling me all I needed to know about what was in the frame, what character it was, which way they were looking, what the approximate camera framing was to be, and in what sequence the shots were to run.

Later, I could confidently enlarge each image represented in the thumbnails to full size and with all the extra detail that those tiny drawings suggested.


So whenever you are working out your animation or storyboarding ideas, remember to think small before you think big!
Posted by Jim Bradrick at 1:56 PM