If you are storyboarding your film or video before animating (and you should be!), how are you doing it?  There are some sensible things you might do to make the process go faster and easier.

The first thing is to learn to think cinematically. That is, to learn the language of cinema that has developed over the past hundred plus years, and to use those rules and techniques to help your presentation to be as clear and effective as it can be.

A film maker, whether in animation or live-action, is a storyteller, and there is little point in being able to animate expertly if that work is poorly organized and presented.  I, myself, am guilty of having neglected to give storyboarding it's due in some of my past work. But for much of my career I have worked in the extremely short format of television commercials, works of between 15 seconds and a minute, that were easy to comprehend and whose storyboards might comprise just ten or fifteen panels in their entirety.

Anything longer than one minute deserves all the care and effort at the storyboard stage that you can put into it. And when you are at the storyboard stage, it is okay to put in even sequences that you feel might be cut out later on, because even if you cut a scene at some later time, to get it down in storyboard panels may be helpful in giving you an understanding of your own story and characters. Such a sequence might contribute to what is called a "backstory" for your film, a behind-the-scenes narrative of your characters' lives that can be of help in stimulating the understanding and creativity of voice actors, character designers, animators and others involved in your production--even if all those roles are just you wearing various creative hats.

(For further reading on the subject of the language of cinema,  I recommend Film Directing Shot by Shot, by Seven D. Katz, (Michael Wiese Productions, 1991) and on storyboarding, Prepare to Board, by Nancy Beiman, (Focal Press, 2007.) Many other books on these subjects are also available.) 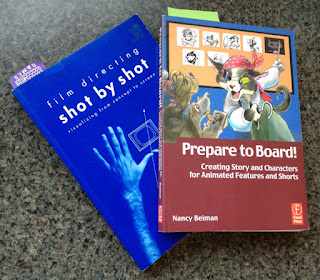 
In a future post, I will discuss digital storyboarding; in fact, I use both paper and digital versions together. But today I want to talk about "old fashioned" paper storyboards.


There is no fixed size for a storyboard panel.  What should be considered is the screen ratio for your final output. Will it be widescreen or some other ratio of width to height? In my case, I have found that the right size for my finish storyboard panels is half a sheet of animation paper. Full size animation paper is usually 12.5 x 10.5 inches [31.7cm x 26.7cm], so half is 6.25 x 10.5 inches  [15.9cm x 26.7cm]. This is quite close to the basic widescreen ratio of 16:9, actually working out to 16:9.5. This is a nice size for me to work, with images that can be read from several feet away if they are boldly drawn, and it is economical because I just take used animation paper with images on one side that I do not care to preserve, and I tear them in half with a straight edge. (And because I prefer to animate on a premium paper called Ingram, which is heavy and expensive, I like the economy of using this paper twice.)


Of course, among the advantages of digital storyboarding is its compactness; it does not require any more physical space than your computer screen. This may be a deciding factor for many in not working on paper, and it is a good reason.  If your workspace is confined to a small apartment, a bedroom, the kitchen table, then paper storyboarding is probably more trouble than it is worth.

But if you can--if you possibly can--find or create some place to pin up your drawings, I recommend it highly. I am now lucky in this way.  After years of pinning up storyboards on painfully small corkboards or on the walls of rooms that soon became pocked with the marks of pushpins, I moved into a new home where I reserved an entire wall to be covered with a synthetic material that is made to take pushpins and which closes over the holes when the pushpins are removed. The board is 5 feet high and 10 feet wide [1.5m x 3m].


In a digital storyboard program such as Storyboard Pro by Toon Boom, you can view your storyboard in a number of formats, from a page of thumbnails to a single panel showing on your screen. But in my opinion, there is nothing like a big board you can stand back from to view the whole thing, or walk up to for a closer view of twenty or ten or even one panel at a time.


You can pace the room while you consider it, turn your head, walk up and re-pin some panels in a different order, make notations and corrections directly on the panels, and conveniently (and dramatically) walk another person through the action that is displayed there.

Next I'll be discussing the Thumbnail (also on paper) Storyboard.