No. 86, The Value of the Second Draft

There was a time when I was writing novels instead of working at animation.  In that time I was seldom ever 'blocked' in the sense of being unable to move forward.  Early on, I perceived that in the first draft, the point is to get the basic idea down on paper.  Writers who waited until it came out right the first time were the ones that got blocked.

Once you have it down on paper, you no longer have to worry about the empty paper; you can concentrate on fixing what is there.  And almost always, it got better in the second draft.  If it went to a third draft, so much the better.

As a film maker, I feel it is much the same process.  As a character designer too.  As an animator, however, I admit I want to get it right the first time, because of the labor. But in a way, if you plan it right, if you do your thumbnails, if you think it through down to the last blink and breath drawn, then you really have done one draft at least by the time you sit down to really animate.

Here is an example that happened just today. It involves both storyboarding and character development. 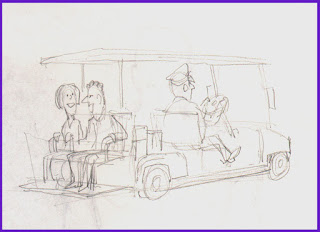 I had made this drawing of an electric airport cart from the rear, showing two passengers riding backward and looking happy about it.  Working on my storyboard today, I redrew the cart to fit my scene; the cart had to be facing left instead of right. Instead of tracing it and flipping the image, which might have been easier in some way, I just redrew it. 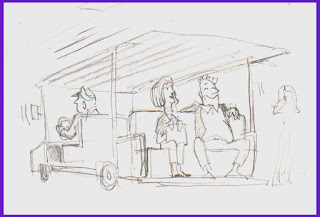 As I drew, I thought about the couple riding on the cart, and although they are minor characters, I decided it would be effective to add some contrast and interest by making the woman neat and prim and the man a sort of slob. They are still having a good time together, but now they are not alike. 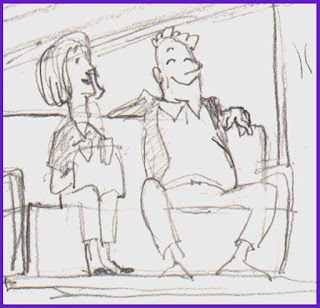 The man is guilty of what we are calling in America the "subway sprawl", where his legs are spread wide apart in a comfortable but sometimes intimidating way.

The original sketch would have served well enough, but the second one is funnier and shows more character in a single pose, all because, instead of just copying the original, I gave it a second draft.

Next: More about storyboards, including my own Breakthrough!