Early in December, I got word from my associate and sometimes partner Don Wallace that he had had a request for a Christmas holiday ecard to be custom made.  The client did not know much about animation, and as is usual in such cases, had no idea of the cost or of the time involved in producing animation.  The client's original idea was far too ambitions for both the money they had to spend and the time allowed.  It had to be done by around December 15.

Don and I decided to counter propose with a concept that was doable both in time and money, yet which would be attractive and also fun to do.  Fun and creative stimulation are things I try to find or inject into all my projects.


So far in this blog I have put a lot of emphasis on full animation, no matter how much time it takes.  This is possible because 1) my film, The Crossing, is a personal project with no deadlines, because 2) I am semi-retired and have a lot of time for it, and because 3) I have a lot of passion for that kind of animation.

But in reality, I am well schooled in time- and labor-saving techniques for just such a project as this one, and I know how to get a good-looking result in a short time.

I conceived an ecard that would get most of its movement from the camera, that would involve just a couple of elaborate backgrounds, and where the only place I would use full animation was in one climactic shot where that animation would consist of only about 15 drawings.

After conferencing with Don on the phone, I wrote a verbal script of my idea.  He submitted it to the client and got their approval.

I began drawing master layouts of the concepts that would make best use of our ideas of camera movement to tell the story. 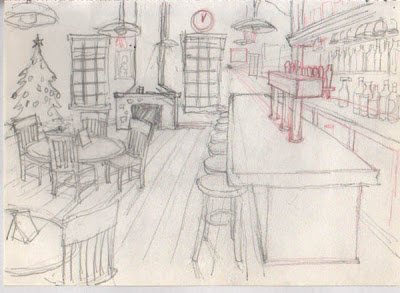 The client was a metal fabricating company specializing in tanks and other equipment for brew pubs.  I looked at a lot of pictures of brewpubs and taprooms and came up with this drawing showing a "typical" taproom decorated for the Christmas season.  This is a freehand drawing, but it does conform to one-point perspective, with the vanishing point visible just to the right of the right-hand window. 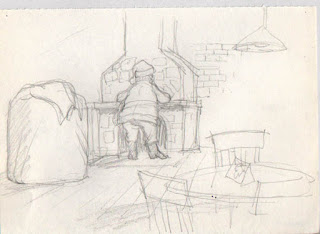 This is another key layout showing how Santa would be standing at the hearth of the fireplace.  It was later decided at Don's suggestion that Santa would not be seen in full figure, that it would be more mysterious to show only parts of him close up, but this drawing was necessary for me to fully visualize the setup, of which I would be showing only details.

If you compare these two drawings with those of the storyboard or of images from the final film, you will see that it was also determined that the tables and chairs were unnecessary complications.

Next: Storyboarding the e-card