One Way to Draw a Difficult Angle


A few days ago while struggling to draw my Old Man character from an unusual angle, I recalled an old technique that I would like to pass along to you.

In trying to draw a difficult head-down view of the character, I was not satisfied with my result.  Here is what it looked like at the time. 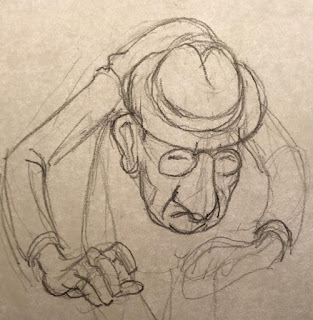 Not having created a clay or Sculpey maquette of the Old Man, I had only my own traditional model sheet for reference.


As you can see, there is a head-down view at upper left, but it is not nearly as severe as I was trying to do. Then I recalled an old trick and decided to give it a try.

I taped a copy of the model sheet right onto my animation board--but not at a level angle; I dropped the right side down so that the profile of the Old Man's head seemed about the same as the angle I was trying for in my drawing. Then I drew a full frontal view alongside, using reference points from the profile view that plotted out horizontally from one image to the other.

Here is a photo taken right from my backlighted drawing disk, with the dim model sheet image showing on the bottom level and the new frontal image on the top level. 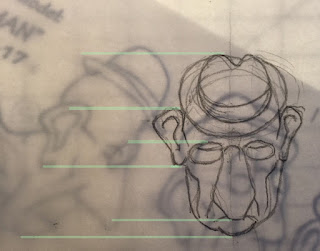 After this, I found it a simple matter to now re-draw my three-quarter-front drawing that had been a problem. It came out like this:

It turns out in this case that my original isn't so very different from the new head, but the new one on the left definitely is more recognizable as the man in the model sheet. I am satisfied with the result.

So take this tip and drop it into your own bag of tricks.  Someday you may want to pull it out to solve a drawing problem of your own!