No. 148, The Ambitious Inbetween Drawing

The Inbetween that Dreamed of Being a Breakdown Drawing

In my last post, No. 147, I talked about planning.  About how, if you planned a scene carefully and deeply enough, you might be able to avoid making too many changes after your first attempt.

Now I want to talk about serendipity and the discovery of things while you are working through a scene that can make the scene better, even if you planned it very well.

Often, this happens at the Breakdown stage, where you are making the major drawings between extremes that are so important to the outcome of a scene.  I have written about this before, too, but now I want to introduce the idea that a change or idea can occur during the period when you are just filling in the inbetweens that connect up everything else.

Inbetweens are usually described as being the least important drawings. Some of them might even be bad drawings, and it might not matter much that they are bad drawings. In the hierarchy of a big studio, inbetweens are the training ground for new animators, giving them their first sense of the flow of animation drawings and how the whole system works. With inbetweening they learn to curb their own style of drawing and conform to the work of others who are more experienced and to the style established by the model sheets, while at the same time they are studying the extremes and breakdowns that pass before their eyes and between their fingers. Ordinarily, with inbetweens, they are expected not to take liberties and to just place the contours of the drawing they are adding precisely where indicated by the notes--half way between two existing drawings and perhaps following an arc, for example. Admittedly, this can be boring as hell.

But I have an example to show you where an inbetween became more important than usual.  It is from this last scene I was working on--the Old Man getting his legs out of the taxi.

Here is the spacing guide that was on the corner of the relevant extreme drawing. 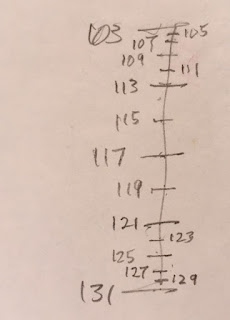 In the pose-to-pose method of animating, which is what I mostly use, the animator would do the most important drawings first, working down to the smaller changes which are the inbetweens.  In this case, 117 is first; it is halfway between 103 and 131. Then 113 and 121 would be done next, and so on, each time subdividing, so that the last drawings to be done would be 105 and 129. What I am getting to is drawing 125, which, as shown on the chart, is half way between 121 and 131. (Are you following this? Remember, at this point, drawings 123, 127 and 129 do not yet exist.) 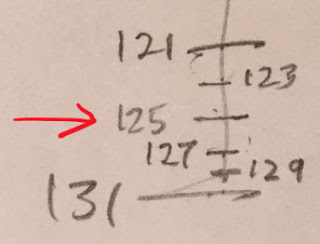 So, 125 ought to have been a straight, mechanical inbetween of 121 and 131. But, I saw something that made me want to change it. Here is what the problem looked like.


The straight interpretation for 125 would have been like this for the leg.


But I saw where I could bring the knee higher here, giving it an extra accent, a little more force or snap, and it came out like this. 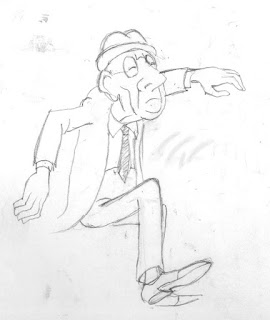 Here is the comparison:

The new leg position then of course affects the leg in the subsequent drawings 123, 127 and 129.

In a hierarchical studio setting, the inbetweener would not make such a change--not without conferring with the animator first. But finding these opportunities for enhancement is one of the few advantages of having to do all the drawings oneself, as I have to do.

The point is that an inbetween may not always just be a boring, incremental  filler drawing that requires no creative thought. Even a lowly inbetween drawing may turn out to be something special.
So, stay alert for serendipity, even when inbetweening!