No. 112, Richard Williams Teaches Me How to Draw Urinals

On my storyboard, I find myself still in the men's room--in the toilet.  And faced with the challenge of drawing a long neat row of urinals in perspective, I soon turned to the renowned animator and designer Richard Williams.

It was not the urinal itself that was the problem, but the convincing rendering of a series of evenly spaced modules diminishing in the distance.  It is easy to know the size at any point along the row by the perspective lines radiating from the vanishing point, but it is not so easy to know where they should be placed along those lines.

In a lot of things, the experienced artist can fake perspective without going to the trouble of establishing an actual vanishing point and then drawing guidelines. Or perhaps a phrase more accurate than the word fake would be "make an educated guess." If the situation is simple enough, one can often get away with it.

But with things as regular as fenceposts or Doric columns, the viewer will be quick to notice if something is wrong in the spacing.  After only a little drawing and a lot of erasing, I remembered that Richard Williams had addressed this issue in his book The Animator's Survival Kit. It was certainly worth looking up.

So here is how I applied it to my row of nine urinals.
What this doesn't give you is any cumulative change in angle as you go down the line. That part, I did fake.

And now here are the urinals again, this time with customers. 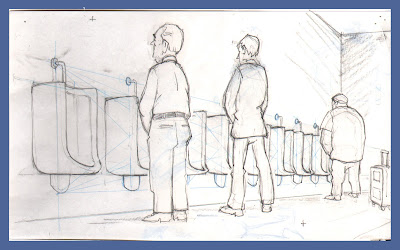 And all of this for a shot that will be on screen for less than two seconds. My thanks to Richard Williams, and to the great Warner's animator Ken Harris, who showed him this trick.
Posted by Jim Bradrick at 6:20 PM