No. 111, When the Storyboard Artist Is Also the Animator... 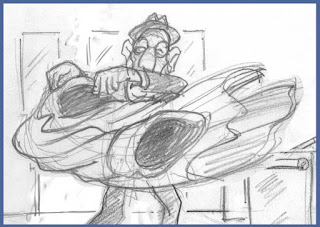 In my case, as an independent film maker, I am just about everything else in the production pipeline, too--but never mind about that.

When I am the Storyboard Person and I come to a scene where my thinking is engaged in the development of a scene, sometimes the Animator takes the pencil away from me and adds some "unnecessary" panels to the board.

Of course they are not entirely unnecessary--not at all.  But they are perhaps not necessary to the storyboard as such; they are instead necessary as thumbnails for the animator. Thumbnailing your animation ideas is considered an essential step for the animator in visualizing all the action of a scene before more detailed work is begun.

I do consider not including these more subtle stages of movement, but when I do, the Animator jumps to his feet in great agitation, saying, "Wait! Having thought of these details, how can you not set them down?  What if, by the time I, the Animator, at last get hold of the scene, I do not recall these inspirations that have occurred to us, and instead do something with the movement of this character that is less interesting than what we have thought of here? Then, having not recorded these fleetiing but wonderful notions, they will be lost."

And so I find that I, the Storyboard Person (Storyboardist? Why is there not a one-word term for this art? Even Inbetweener, awkward though it is, is but a single word) cannot argue with the Animator in this. If you think it, if you like it, write it down or draw it; make a note of it.  Because, you see, if you think of it and do not record it, and then you forget the thought that you had, you may even forget that you had any idea at all.  You will not even know that anything is missing. Why take that chance?

Following is a part of a scene that might have been depicted satisfactorily in just five panels, storyboard-wise. But for the sake of the Animator, I (the Storyboard Person) have included some extra stages of movement.


Yes, we could easily have met the requirements of the storyboard with only seven of these nine images, and perhaps with only five.  And yet, having visualized the action, why not note it down? In my opinion, storyboard artists should always err on the side of excess rather than omitting that which might prove to be useful and evocative.
Posted by Jim Bradrick at 4:58 PM