No. 83, Locked Out of Linked In Groups 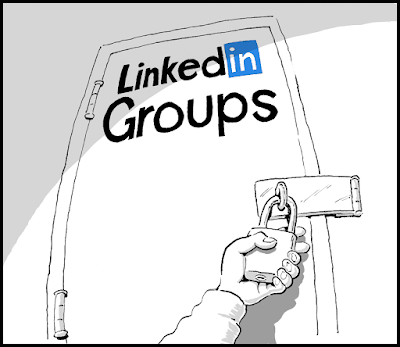 Update: as of the new year, 2016, this issue has been resolved (or my period of exile ran out) and I am now able to post to my groups once again.

When you run a blog like this one, you want as many people to see it as possible.  And you don't want just anyone to see it; you want everyone with an interest in the subject matter to see it. Naturally, the greater readership you have, the more responsibility you feel to do a good job, and also the more satisfaction there is in blogging. So, you look for the best ways to get people (in my case, mostly animators) to notice it and take a look and, it is hoped, become a Follower.  Up until now, my best path for that has been the various Linked In groups for which animation is the focus.

Each time I posted to my blog, I would run a notice about it on relevant group sites, and typically I would get a surge in page views.  In this way, I have been gradually building up my readership.

Suddenly, however, I find that I am blocked from free access to those groups.

With a little checking, I found that just one complaint of impropriety, spamming or self-promotion, whether or not it was justified, was enough to get you blocked from a group. But in Linked In, this now pulls a trigger that blocks you from all your groups for an unknown amount of time.  This has now happened to me.  In some cases, my postings to the groups do show up on the group web page, but not in the periodic emails promoting activity in the group. On the internet, discussions of this problem by others who have felt unfairly blocked have revealed no good solutions or effective avenues of appeal.  One person suggested appealing to the group moderators, but many groups now do not list their moderators and their contact information, and anyway this would not clear the other blockages that have been automatically triggered. And Linked In has no editors or supervisors to whom to appeal for a review of one's situation.

As to the nature of my postings, are they inappropriate? Certainly not; they are targeted to the very narrow-interest groups most likely to want to see them, and their content is as free of socially questionable material as I can make them.  And also they are most definitely not spam, unlike the recruiting and job help postings that have been clogging group emails since I began my blog.

And what about self-promotion? Well, of course it is self-promotion, but no more so than a post by a young animator who wants people to look at his or her demo reel or animated sequence.  In fact it is less so, because my blog is informational and instructional; it is possible sometimes to learn something from it that may help a less experienced animator to improve his skills or to avoid some mistake in approach or execution.

There may be another avenue open, such as Google Communities, or perhaps I will get reinstated sometime. For now, I am flummoxed.