No. 67, More About Animating 4-legged Animals

It is worth pausing here to talk a little about animating animal legs.  You might suppose that if you've seen one four-legged critter moving, you've seen them all, but this is far from true. Once I assigned the animation of a little cartoon goat to one of my animators on a children's game.  She did a perfectly acceptable job on it and I approved it, but a week later I happened to see a goat walking and was struck by how the goat appeared to be walking tip-toe, like a woman wearing 5-inch heels and having to bend her knees slightly.  That's how they walk! It would have been a charming touch to have included in the scene.

In my last post I mentioned a book, Dog Lomotion and Gait Analysis, by Curtis Brown (Hoflin Publishing) that is a favorite reference for this kind of thing.

If you are interested, I find that this book is still available.  I also see that there are now some others on the same subject, but I cannot speak about them.

Even within a single species, not all animals move alike.  That is especially true of dogs, which have been bred to take so many different forms and proportions. Tall dogs, for example, tend to use the pace (moving both right legs forward together, then both left legs) instead of the trot (a front leg moves forward with the opposite rear leg).  Terriers will never move like greyhounds, even walking and standing.  The book goes into all this and more in great detail--in fact, probably in more detail than one would ever need.  But if I were animating a Lady and the Tramp or a 101 Dalmations today, I would certainly want this book at my desk.

I discovered Dog Lomotion by chance, and I have had my copy for many years.  In fact I wrote a review of it for Animation World Network back in 2000. Here is the link if you would like to read that review.

Of course now there is a wealth of movement reference of animals on the internet, most of it free as in YouTube, and I recommend that you take advantage of it whenever your assignments call for some realism in animal movement.

Let me draw your attention to one particular detail of four-legged anatomy that I think is common to all digitigrade mammals: the pastern.  Digitigrade means walking on the toes, as distinct from plantigrade, which means walking on the flat of the foot. (Bears and humans are plantigrade animals.) Most notably,  horses and dogs and cats have the pastern, as do all their close relatives.  It is a flexible joint in both front and rear feet that allows great energy to be suddenly released in running, and visually it is an animator's delight. 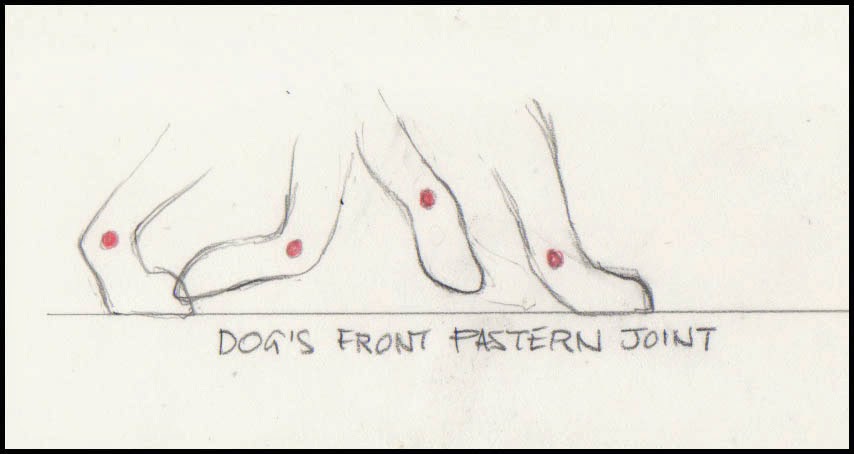 In the drawing above, from left to right, you can see the changes in the pastern joint of the front leg of a dog.  First it is compressed as it bears the full weight of the animal and propels him forward; when it is released and carried ahead it makes a sudden and beautiful flip, dragging the foot behind it; then as the whole leg is brought forward the foot drops down from the pastern, ready to make contact with the ground; and finally, pressure on the foot reverses the angle of the pastern once again.

Of course this all happens very quickly as the animal moves, but to include this action in the animation of dogs or other animals always adds a snappy elegance to their movement, and it is a prime example in nature of what the great animator Art Babbitt called "successive breaking of joints." You can exaggerate it; you can have fun with it; but you should never leave it out.

Here are 4 consecutive drawings from my fox's trot that show the pastern working.

Next:  Thought Process and the Animator