No. 66, Creating a Four-legged Walk Cycle


A short while back ( Acme Punched posts No. 60 thru 62) I showed you my approach to creating a walk cycle for my character Albert.  Now here is a walk cycle, or rather a trot, for the little fox character.

First, a bit of re-design was in order.  I made the original model sheet without much attention to the real anatomy of a fox.  This is a cartoon and you can do that, but he does walk on all four feet so I have now decided it would be good to have him move something like a real fox, and for that, he has to be constructed a bit more like a real fox. 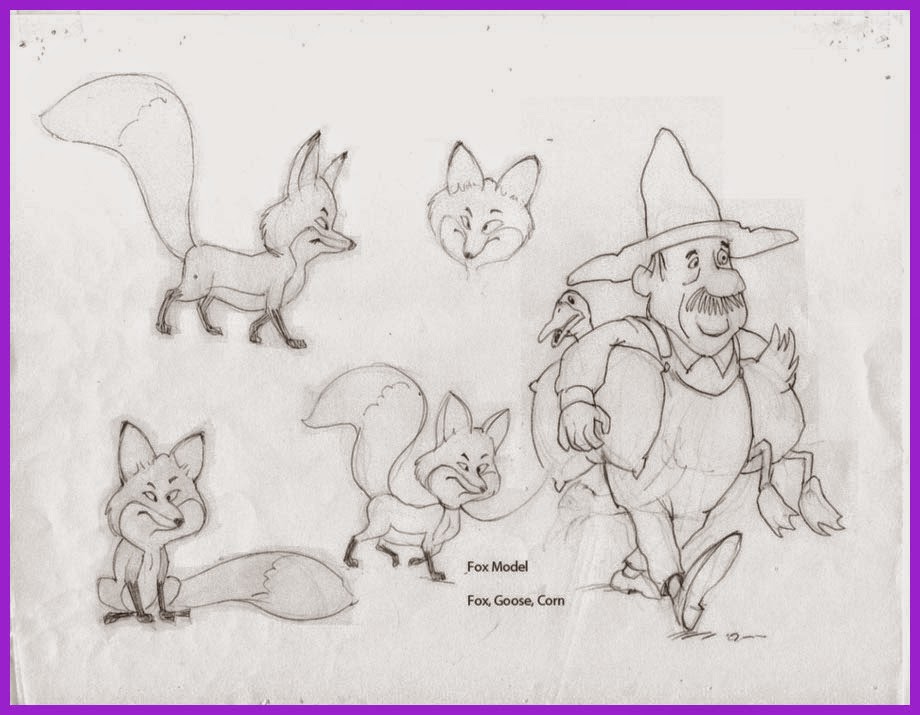 In the original model sheet, above, he is rather swaybacked and holds his tail erect.

The revised design makes his spine arc upward a little, as in real canines, and shows him holding his tail almost straight out behind him when moving. 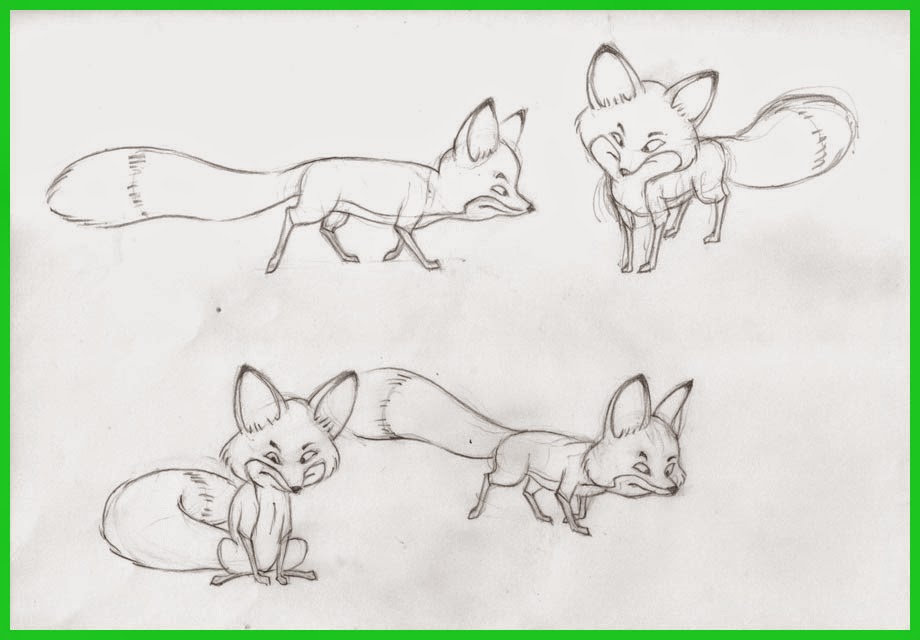 Once again I wanted to try something I had read about but had never actually done: to animate the head, body and tail before doing the leg animation.  This is effective in animating dance and other controlled movement such as sword fighting.  Disney animators have used the technique in animating such semi-realistic creatures like deer (Bambi), though others actually did the reverse, animating the legs before the body. (I would cite a reference for that, but can't recall exactly where I read it.)

Anyway I thought it might work on my cycle of a fox trotting.

This was the first test.  It was made using just three drawings, with the middle drawing favoring the highest one in its spacing (see Fig. 1). I thought the rhythm was fine, but since the fox will sometimes be quite small on the screen, I decided it was too subtle.

Now for a broader movement, in which I simply let his body drop down farther.

At the time (we will come back to this) I thought it was fine, and went with it. Here is the spacing.

Then I was ready to add in the legs.  This is a basic canine trot.  I referenced a favorite but little-known book of mine: Dog Locomotion and Gait Analysis, by Curtis M. Brown.  Brown is not an animator but a dog breeder and dog show judge, but the sequential drawings of the gaits of various breeds are a gold mine for anyone interested in how dogs move.

Here is the test.


Hmm.  I sort of liked it when I saw it, but...something was not right.  Can you see what is wrong without reading further?

If you said that the head was moving too much, you would be right.  I had lowered the head along with the torso.  It is the same as it was in the second version without the legs (see Figure 2 again also), but somehow it was not apparent to me until I saw it all put together.

Solution?  Leave the torso as it is but just space the head much closer to the other heads.

Now it is working right.  Many animals avoid movement that bounces their heads up and down very much, because either they need steady vision for pursuit of prey or to detect danger.

It seems to work!


Next: More about working with 4-legged characters!