The oldest film animation book that I know of is so old, Walt Disney and Friz Freleng learned their craft from it.  It is so old, it predates not only color movies but sound movies.  It is ninety-four years old. 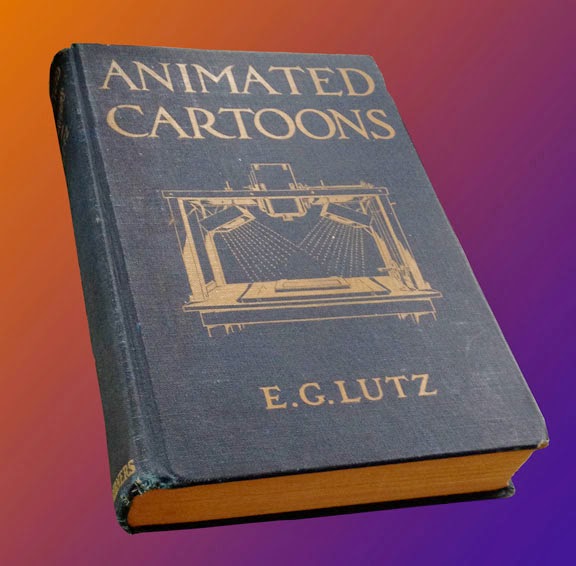 Published in 1920 by Scribners, the book is called simply Animated Cartoons, How They Are Made, Their Origin and Development, by E.G. Lutz.  Let's consider the state of the art in 1920.

In the United States the industry was dominated by such studios as Hearst, J.R. Bray and Paul Terry.  Many of the series being produced then were animated versions of popular newspaper comic strips, and were looked upon by the syndicates as additional promotion for their newspaper features.

The technology of motion picture film, cameras and projectors was just twenty-five years old.  Winsor McCay had produced Gertie the Dinosaur in 1914, just six years earlier.  Disney was still a very young man in Kansas City; he hadn't even begun his work for Kansas City Film Ad and Newman's Laugh-o-Grams, much less his Alice in Cartoonland series.  And Mickey Mouse?  The Mouse was still seven years in the future.  Even Felix the Cat, the  first-ever character and marketing sensation in animation, had just been established that year.

The book is actually a workable text for someone wanting to learn the trade at the time.  Beginning with an explanation of the principle of persistence of vision and a description with illustrations of a film shutter and projector, the book goes on to give a history of animation novelties like the thaumatrope and zoetrope that preceded film technology.  Then begins the how-to section, which takes up the greater portion of the book.

The basic idea of the animation drawing desk--a glass or plastic panel, a backlight to enable you to see through several drawings, a way to register your drawings with one another--is unchanged to this day.

Timing back then, however, was quite a bit different, since the standard film speed before sound production was just 16 frames per second.  At that speed, the animator did not have to make so many drawings per second, but of course nothing was as smooth, either.

Transparent cels of nitrate celluloid were already in use by 1920, but production standards were poor and so they were often of variable thickness.  Also they were expensive, so their use was limited to hold cels for character parts that were not moving.  The illustration above shows that the moving arms and mouths were still to be inked onto paper, while the parts that were on hold were on cels registered on top of the paper.

Movement cycles were in common use when Lutz wrote his book, but an animator's  understanding of how to convincingly convey weight and the plasticity of form were still a generation into the future.

Animated cartoons were then full of effects like these "sparks", as Disney called them, which were lifted straight from the panels of the newspaper comic strips out of which the medium was spawned.  At least the viewers were familiar with the symbolism.

In my case I was lucky to find a first edition of this old book some years ago at Powell's Books in Portland, Oregon.  Since then, however, a facsimile edition has been published by Drawingbooks.org, so you can get your own in hardbound or paperback.  There is even a Kindle edition available for a very small charge!