No. 37, Drawing Problem 1: The Eccentric Breakdown Drawing: A Drawing Challenge for You (Part 2)


Well, one of my guesses was right: I had one person ask to do the drawing.  His name is João and he lives in the UK.

Here is his drawing: 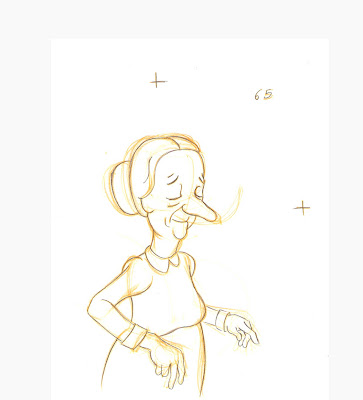 It has a lot going for it. The character is quite on model, considering that João had no model sheet and only two poses to work from.
Let's see how it looks in action, and then we will talk about it some more.

Here is the pencil test, repeated 6 times so you don't have to replay it each time:


Also I include an image that shows simplified drawings of the two extreme drawings in blue and red.  João's is the one with the yellowish outline. 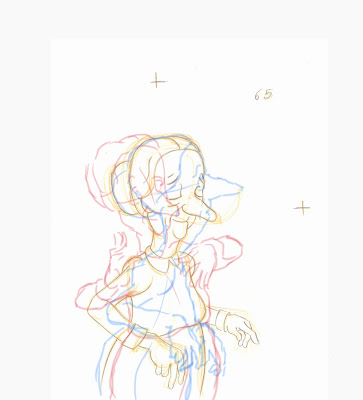 The order of the images is blue, yellow, red.  We see that the artist definitely understood the concept of the eccentric breakdown; clearly this is not a halfway inbetween.  He chose to rotate the character's head while keeping its mass in place.  The right arm goes down and the left lifts up.  The body rotates almost all the way but its mass is positioned halfway.

This is generally a good solution and would work pretty well.  There are two things I want to point out, however, that I would  change.

The first is that it is not the best thing to rotate a head in place like a world globe turning on its spindle.  The features can appear to slide about, and also it is just not the most interesting way to turn a head.  I recommend displacing the head forward, something like this:
Moving the head forward a bit also provides an anticipation before the final backward movement.

My only other change would be to make the smile bigger, but...

Here is something I learned only after years of making the same mistake:  when you change a facial expression during a big movement, the change is lost. No one will ever see it.  It may be appropriate to have the expression change anyway, but if you want it to be noticed, it needs to happen when the character is mostly at rest.


Thank you, João, for your participation.  I hope that in the near future, when I have another of these drawing challenges, some more of you will give it a try!
Posted by Jim Bradrick at 11:11 AM