No. 36, Drawing Problem 1: The Eccentric Breakdown Drawing: A Drawing Challenge for You (Part 1)


Before I will be able to  post Part 4 of Problem Six, I must create lot of drawings, so it may be a long time before that post.  In the meantime,  I thought I would ask if my readers would like to engage in an animation drawing exercise.

This is not a contest.  It is a chance for you to try your hand at some creative thinking of the kind that keeps me excited by animation year after year.

What I am calling the Eccentric Breakdown drawing is beautifully described and illustrated by Eric Goldberg in his book Character Animation Crash Course (Chapter 10: Having a Breakdown!).  Dick Williams goes into it also beginning on page 218 of The Animator's Survival Kit.

First, do we all know what the breakdown is?  It is the main drawing between two extreme drawings.  I used to think that that was all it was: just the first and biggest inbetween.  As it turns out, in animation the breakdown is just as important as the extremes, because it tells us how we will get from one extreme to the other.  It can change the entire character of the animation.  And in a situation where your inbetweens are to be completed by another, less experienced artist, the breakdown helps the animator control those inbetweens to a great extent.

Here are the two extremes we will be dealing with in this little problem.  You have seen them before: the first is the held pose (with blinks) of the woman as she stares, mystified, at the thing on her husband's head. 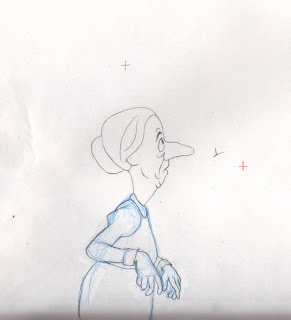 The second is the beginning extreme pose of her delight as she recognizes that it is a little fox. 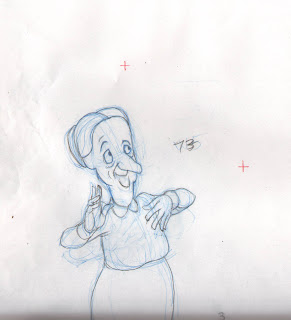 Here is the spacing guide I have worked out, showing the number of drawings that will get us from A to B, and how they are spaced. 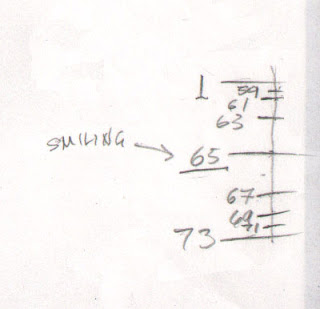 The drawing spaced in the middle (65) is the main breakdown we are concerned with.  The whole movement will take 16 frames (we are using film speed of 24fps), or two-thirds of a second.

Okay, let's get into it.

I am the Animator who has done all the extremes and spacing guides, and you are the Assistant Animator.  Often I will do my own breakdowns, but today I don't have time and I am asking you to do them for me.  I could not trust this to a beginning inbetweener, but you have some experience so I am asking you to try it.  We begin by discussing the two poses with which you will be working.

"Drawing 1 is a long hold; she hasn't moved her body for a while.  Suddenly she is going to pull out of that pose and start to move briskly, so you need to build an anticipation into the breakdown, drawing 65.  If she just pulled straight back to drawing 73 it would look unnatural, so you must think of a good way to do that.  By the end she must straighten her spine, and her head and body must make a quarter turn to the (her) right.  And, on drawing 65 I want you to show that she is already smiling; that she has by this time already realized everything and her body is just catching up."

You say, "Can I look at the other drawings to see the context?"

"Yes," I say.  "All the extremes can be found here, and there are various versions of the pencil test in recent posts for Problem Six. Now let me see you give it a try."


If you want to give this a try, send me an email to: bradrick@olypen.com, and I will then send you the two extreme drawings above as jpegs for you to print.  Take the printed drawings and tape them each to a sheet of animation paper, so that the registration crosses are in alignment.  Then make your version of drawing 65 on a third sheet of paper.  Remember to trace the registration crosses onto your new drawing. 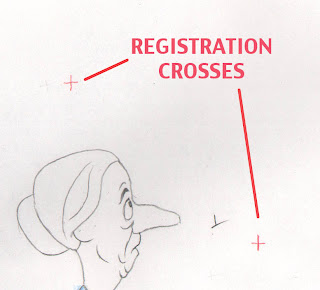 Then scan the drawing and send it back to me.

Right now I don't know if I will get 1 entry or 10, or none.  When I get your drawing I will put it up on Acme Punched and write a comment about it.  Unless you tell me to use your whole name, I will just use your initial and country of origin.

Why not give it a try?