First, you will need to understand the story at this point.

The Story:
The man has arrived home to present 3 things to his wife.  He has already given her the goose and a bag of grain.  But he has concealed his third purchase as a surprise: under his hat, perched atop his head is a live fox.

In problem 2 we saw how he pulled his hat off, using the stagger effect.  Now we see the fox, his ears down and his tail tightly furled around his body, so that the man's wife is not sure what she is seeing.

The Scene:
Closeup.  The fox uncoils his tail and shakes himself out.  The man reacts in a subdued "take" at the movement of the fox.

The First Version:
In my first pass, I had the man reacting with alarm as the fox uncurled.  Here is the pencil test of that:

In fact, the first test had the man waiting until the fox was completely uncurled before he reacted.  This was poor planning, a too literal interpretation of the rule of thumb that the movement of a secondary character can draw the viewer's attention away from the main movement of the primary character.  Often that means to have only one character moving at a time. But I realized it doesn't work well for the man to wait all that time before reacting to the movement of the fox; he should logically react right away.  Therefore as you see above, I have moved his reaction up to the beginning of the movement of the fox.  This is better, but still, it does distract.

What would be a better solution?

In watching the movement of the fox (which I am basically happy with), I realized that it would be more effective to have the tail begin to unwind much more slowly, then time the man's reaction to happen with that.  Thus the man will be at rest (and not distracting us) by the time the fox goes into his more violent movement.

There are two other things I am going to change here.  First, the shot was to be a wide view as you see in Pencil Test 1.  Since planning that, I have had more experience in Toon Boom AnimatePro, and found how easy it is to use a Camera Module.  I decided I wanted a tighter closeup, excluding the wife from the frame, more like this: 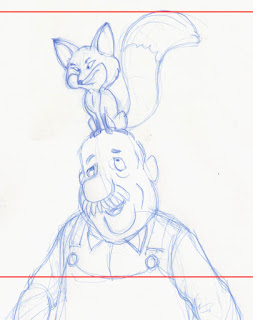 The other change is to the man's reaction itself.  Instead of being alarmed by the fox's movement, he should react only a little here, with an expression more of delight than of uncertainty.  Notice that I have the man's head moving very little, because I want the fox to remain fairly stationary.  I will stay with that constraint, mostly moving his shoulders instead of his head, and giving him that more pleased expression.