Every once in a while, I get down Richard Williams' book from my collection of something like 150 books on animation, and I go through it from beginning to end. This does not count the times I get it down to look up something specific, as for example recently when I wanted to review what he had to say about someone clapping their hands.

The Animator's Survival Kit by Williams and Illusion of Life by Thomas and Johnston are the two  most influential and informational guides to the process of traditional animation that I can imagine. Of the two, Survival Kit is actually the more useful.  For one thing, it is organized better; if you have ever tried to look something up in Illusion of Life, you will have little idea where in the book to look for that something.  You just have to turn pages until you find it. This is because, to a great extent, Illusion of Life is organized chronologically, more as a history than as a text book.

Survival Kit is actually everything that Richard Williams could think of about animation that could be written down.  It is a how-to book and a how-to-proceed book, and it also tells you why.  It is not a bible but more a book of lore, techniques that amount to a sorcerer's compendium of magic  gathered from years working with Disney animators and Warners animators and others, and setting out the spells and rites (and hard work) that can bring forth good and interesting animation that is alive. When I get it down for a thorough review, it is to look for things I had missed or glossed over before, and there is always something new for me.

On the subject of characters' walks, Williams does seventy-three pages, and that doesn't include runs and jumps and other such variations. So it may be no wonder that one tends to turn pages through this section, stopping to read just here and there. This time I gave it a closer scrutiny, because I was about to do a new walk cycle for my Old Man character (for my film Carry On) and I wanted to work more with the multi-pass approach to any complex animation, wherein you focus on one thing at a time, as for example, first the legs, then the arms, then the head, etc. By this method you can successfully carry out something that in the aggregate is more nuanced and rich than you could accomplish if you tried to think about everything at once.

This turns out to be a difficult thing to learn. I am always tempted to try to get everything down, and everything right, on the first pass. But my results that way are not always good, so I wanted to commit myself to the multi-pass system that is recommended not only by Williams but was practiced by Milt Kahl and others. 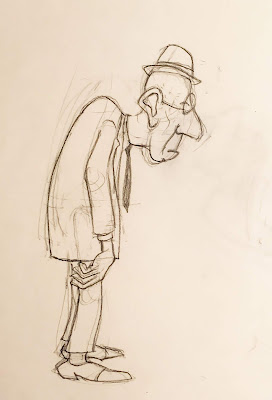 The brief, or requirements, for this animation were obvious to me.  The man is old, and he has a deformed spine, but he is not weak--he will be dragging that huge steamer trunk around, remember.
So his walk may be slow and deliberate, but not feeble or faltering. And, I don't want the walk to be too comic.

The obvious starting point is with the legs and feet. I did of course put in the torso, head and arms, but just as placeholders.  I am not thinking much about them yet: they are subject to change.

Each step will be sixteen frames, or 2/3 of a second at 24fps, rather than the 12 or 8 frames that we are used to seeing. I will animate on 2's rather than 1's, so each drawing gets two exposures. For the complete cycle of two steps, there will be sixteen drawings.


Well, it's working. He has an almost shuffling step, making contact on the ball of his foot rather than the heel, and I think the amount of up and down movement on the body is good too.

Before I add in the eight inbetweens, I will now make a second pass for the arms and hands, and I have an idea about this I want to try. We'll look at that next time.
Posted by Jim Bradrick at 9:52 PM