How Many Frames per Second? 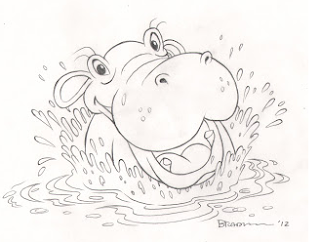 Early on, I learned that it was not a good idea to think of timing in terms of frames. That is, how many frames it took to do something: throw a ball, take a step, do a take. A couple of decades before, there wouldn't have been any reason not to, because everything was projected at 24 or 25 frames per second (fps.)

A couple of decades before that, before 1928, the standard projection speed was 16 fps; it was the advent of sound that standardized the speed at 24. And film animators often learned to think of their timing in terms of feet, because one linear foot of 35mm film contained 16 frames. I think it must have been film editors who physically spliced together actual lengths of film stock who thought of that.

Shortly after I got into animation, though, computers set a new standard of 30 fps, so if you worked in computer games, you worked with that. It was based on 60 cycle alternating current, programmers have told me. It can boggle the mind, doing one project at 24fps and the next at 30.

So I learned to think of my timing in terms of seconds and fractions of seconds, a system which works at any speed. I have done work at 30, 24, 12 and 8 fps.

Eight frames per second is a funny frame rate. It is slow enough that the eye is not quite fooled by the motion. One can perceive the jumps from image to image. Japanese anime is full of it, though, and most people don't seem to mind (though I do!)

My experience at using 8 fps was on a children's 2D video game at Humongous Entertainment.  As it happened, that particular project never got finished, but I did some pencil tests, and I found that it was possible to get a passable result.

And there was one other project, just a few years ago, a picture book which also was never published.  As i recall, I was asked to do a simple cycle of animation of a cartoon hippopotamus rising out of the water and sinking back again. Because of the technology being used on the book, there was a severe limitation of 7 or 8 frames for the action. I was dubious, but I tried it, and I found that at 8 fps it didn't look half bad.  Here is the pencil test of that, repeated a few times.

Rather fun and funny, I think, and I am sorry it never got printed and seen. I hope you enjoy it now.