Just a week ago, while visiting our nephew and niece, I entertained their almost seven-year-old daughter by drawing and inking a picture of her favorite doll.  She did a lovely job of coloring it, as you can see here. 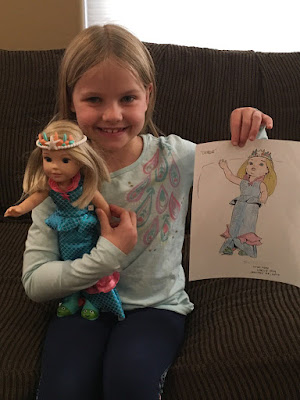 This young lady is home-schooled, and I got to telling her parents how I had once taught a stop-motion animation class to a group of home-schooled children near where I live.

Stop-motion? What's that? they wanted to know. Most lay people do not have the words to describe the different genres of animation--hand drawn, stop motion, clay animation (a form of stop motion, of course), paint-on-film, CGI--even if they do discern that there are differences.  I explained that I had got the kids in my class to bring in toy cars and other toys that they wanted to see animated, and I shot the tabletop with my Macbook Pro using my pencil test software. I just operated the shutter; the students did all the animation. We had a lot of spectacular car crashes on that tabletop.

I hadn't ever looked for stop-motion apps to get, but I did so that day, and I found that there were several. We chose to download one called, simply, Stop Motion, or Stop Motion Studio if you got all the features. By the next morning my nephew had gone out and purchased a little tripod with a phone mount on it to hold the camera steady.  I did one little demo for my great niece, using her dollhouse for a set, and voila! She was hooked.

I hear she is busy making stop-motion films herself now, with perhaps a little help from her mom and dad. It was inspiring to me to see her enthusiasm for bringing her toys to life in motion--for being an animator!

I also had another inspiration that pertained to my own work.  But that is the topic of my next post.