We all know by now that CGI character animation has the ability to be far more subtle in movement than hand-drawn work could ever be. The limit of hand-drawn subtlety is easily defined: it is basically down to the width of a pencil line. That's why in our hand-drawn medium, we look for other ways to distinguish our craft than by competing with CGI in this area where they are clearly the champs.

That said, we still need to express some subtlety and slow movement in our work, sometimes getting down to that pencil-line thickness between drawings in order to put across our ideas in animation. 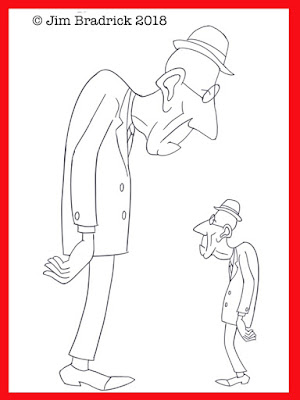 Yet scaling my characters smaller on the page than they have to be is a mistake I have repeatedly committed in my own work. I just caught myself doing it again, struggling with miniature hands and fingers and other details until I realized my mistake.

Animators who do their hand-drawn work paperless, drawing digitally with a stylus directly into the computer, do not really have this problem because they can zoom their view in and out at will. It is to those of us who still animate on paper that I am talking to here.

In the days of filmed animation, the animator was usually forced to work at the scale dictated by the action within the layout. A character might have to run off into the distance until it was quite small on the paper, losing detail and integrity, going off-model along the way. There were examples at Disney where tiny onscreen characters had been animated large, then reduced to the correct relative size with photostats before inking, but that was expensive to do and rare.

But if, like me, you do a hybrid sort of animation, working first on paper and then scanning the drawings into ToonBoom, TV Paint, or other such software, you can take advantage of the software's scaling capability in reverse.  For example, if you have a situation where your field to photograph is 11 inches wide, and your character in that scene is two inches high, you can animate that character on paper at 6 or 8 inches high and then, after scanning, bring that layer down to the correct scale relative to the background.

One limitation to this is a character who must be animated showing her whole height; in that case you would not want to scale it up so much that it would crop off any of the limbs.

The point is to always think about this when approaching a scene.  Could you be drawing larger? If you could, then probably you should.