No. 171, The Actor Who Might Have Been an Animator: Scott Wilson


Most fans of The Walking Dead probably know that actor Scott Wilson died at age 76 on October 6 of this year.  As a character actor he was also well known for movie roles in such films as  In the Heat of the Night and In Cold Blood, both from 1967, and in The Great Gatsby and many others over the years. 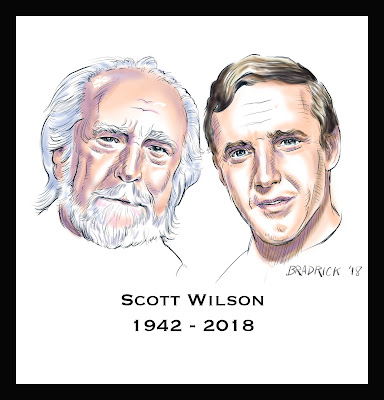 What is not well known is that he was always interested in animation, and that he had wanted to be an animator at one time.  Looking through online obituaries, I have not found a single mention of this obscure fact.

Years ago--I don't know where--I read of this interest of his, and I just filed it away in my trivia filled mind. Then, not long ago, when reading or listening to a Richard Williams piece on You Tube, I was fascinated to learn that Wilson as an older man had attended one of Williams' four-day animation class seminars. Richard Williams quoted Wilson as having made a remark in class about a similarity between live acting and acting in animation, and in Williams' book, Scott Wilson and his wife, Heavenly, are mentioned on his acknowledgements page.

To me it was a validation of my previous knowledge of Scott Wilson's interest, and it showed that his fascination with the art of animation still burned somewhere in his heart, despite success in his acting career.

I don't know any more than this simple fact, but with me it earns him this respectful obituary not only as a fine actor, but as an animator who might have been.
Posted by Jim Bradrick at 9:02 PM