The Inbetweens and Key Drawings


I have now done my animation of this scene, and there were some surprises. More about that later, but first let's look at the main poses.  We began with the two storyboard poses last time; here is how those translated into animation drawings. 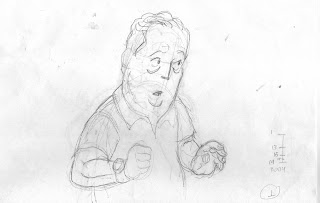 But then the second storyboard panel...

Ended up converting to two drawings: this one (which pretty much resembles story panel 2)...

...and also this one, an even more extreme compression of Nelson's body.

This last drawing and the six inbetweens leading to it comprise a moving hold, in Disney parlance, ending in a trembling vibration on ones between drawing 71 and drawing 72 (which is drawing 71 re-traced with some minimal displacement of forms; that's how you get an effect of vibration or trembling).

At the beginning of the scene, before Nelson goes into his cringe, you will see that I also have him quickly looking one way and then the other.

Here is the first pass pencil test of this whole thing:


What do you think? My own opinion: the cringe part is good but the beginning where he glances back and forth does not read very well.


Next: We'll add a couple of holds, and also talk about those quick transitions.