No. 105, The Animation Books of Preston Blair

Like the Volney White book reviewed in posts No. 100 and 101, Preston Blair's animation books--two of them--were first published by the independent California how-to art book publisher Walter Foster. For many years the Foster books appeared in an appealing large format, 10 1/4" x 13 3/4" (26cm x 35cm), usually between 32 and 40 pages. This size worked well for art books where the illustrations outweighed text. And for many years, each book was just one dollar.

[Note: I just discovered that Michael Sporn wrote about Volney White's Animated Cartoons for the Beginner in his Splog back in 2010.  He had much the same take on it as I did, except that the name of the author was then unknown.  Here is a link. You have to scroll down the page to get to the article.] 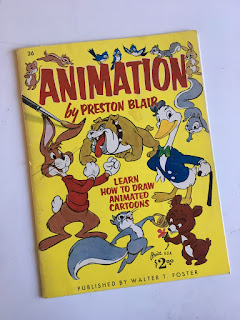 The first title of the pair, Animation by Preston Blair, appeared in the late 1940s or early 1950s--publication dates for this company seem to be nonexistent--and was sold right alongside the Volney White title in stand-alone wire racks that sat on the sales floors of art supply and paint stores across the United States. In my Kansas home town, the display occupied space in a store that I recall as selling mostly Sherwin-Williams house paint. Thus came into my hands in middle America a book by a highly skilled animator, veteran of both Disney feature animation and MGM short cartoons, at a time when information about animation above the level of a general-interest magazine article did not exist.

For me, it was exciting and revelatory. To begin with, the drawing and character design was graceful and rich in the best tradition of Hollywood animation in the post-war years. Many of the character designs looked like disguised variations on famous characters of the big studios; in fact, I later learned that the cat and mouse featured on pages 4 and 5 were, in an early edition, actually Tom and Jerry of MGM Cartoon Studios, and had had to be changed, presumably after MGM objected.


I also recognized the sneak animation cycle on page 31: instead of a modern hunter with a shotgun, it had been a cartoon indian with an enormous nose.

Even though Blair had to change the characters, his use of these cycles and sequences was in my opinion legitimate since the animation was his own.  Here are a couple more examples:

The above heckling sequence can be found in the Tex Avery cartoon Batty Baseball. Again, the character's appearance has been changed from the original.

Notice the registration marks that appear above and below most of these animation sequences; this made it possible for aspiring animators to trace or copy the drawings in register with one another so that they could then attempt to do the inbetweens. (Even the heckler above can be put into register by using the indications of the edges of the bench that the guy is sitting on.)

Below is the sensationally sexy (for the 1940s) dancing girl that Avery used first in Red Hot Riding Hood. She reappeared a few times under different names.

The following shows a whole page of simplified standard movement cycles. These have benefited me many times over the years, and I am sure that many others would admit the same.  There was also a page showing similar movement cycles for four-footed characters.

Perhaps most instructive of all in one way was this sequence of rough animation of a dancing alligator from the Dance of the Hours sequence of the Disney feature Fantasia, because these are authentic rough animation drawings; not the faked stick figure drawings used by Volney White and others to show basic structure, but actual rough drawings where the animator was searching for the right balance of shapes and contours, and one can see the thought and the basic process of honest exploration without apology for the trial and error that is revealed here. It is the real thing.

It was to be decades before a better guide to animation drawing was published. Preston Blair's Animation is no longer available in this large format, but a more recent publication includes all of this material, and more.  That will be the subject of post No. 106...


Next: The Other Preston Blair Animation Books.