No. 100, Book Review: Animated Cartoons for the Beginner 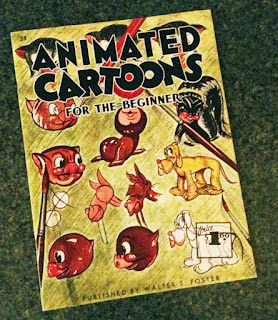 Published privately by Foster Art Service of Tustin, California, a private publisher of large format how-to art books that were distributed across the United States beginning sometime in the 1940's, Animated Cartoons for the Beginner is one of the first animation books that ever came into my hands. Priced at one dollar, it was part of a line of instruction books that included titles about drawing, painting in many media, sculpture, and various art crafts; eventually the list numbered over 200 different publications.

Many of the books were credited to known artists, but number 25, Animated Cartoons for the Beginner was anonymous and remained so for decades. Recently I learned on the internet that the author and artist was an animator named Volney White, who lived from 1907 to 1966. He worked for Romer Grey studios, for Schlesinger under the directors Norm McCabe and Frank Tashlin doing early Porky Pig Looney Tunes, and then for Paul Terry.

The Foster books also failed to carry any publication dates, and I have not been able to find out when it first appeared in print. But the drawing and animation are very much in the Warner Brothers style of the late 1930's, with character designs largely dependent on circles. The characters had large eyes with huge pupils, exaggerated highlights, and eyelids that came down like polished shutters, apparently designed to look like they were heavy with eye shadow.


The style is consistent with the known work that Volney White did at Schlesinger's around 1937, on such Looney Tune cartoons as Porky at the Crocadero or A-Lad-In-Bagdad. (These cartoons are available for viewing on You Tube and other video sites.) There is also a clear influence of "Cartoon Charlie" Thorson, a Schlesinger studio character designer at the time and the man who drew the famous original "Bug's Bunny" model sheet for Harum Scarum.

As to content, the first half of the book's thirty-two pages are devoted to character design, something that author White clearly enjoyed. Most of the character drawings are paired with so-called "rough" drawings of the same thing, yet instead of real rough drawings, these are the usual circle and stick figure de-constructions that persist like some undying urban legend about how cartoonists draw.


He might have done better to have got right into the subject of inbetweening, the beginning animator's traditional training regimen which is so valuable because it makes a newbie animator actually useful in a short time while exposing him or her at ground level to the practices and standards of the studio for which he will work, and because there is no better way to understand the process than to handle and work with the drawings of a more experienced animator. The best example of practical inbetweener training that I have seen is in the book Animation in Twelve Hard Lessons, by Bob Heath. (See my post No. 18 for a review of that book.)


When finally the book gets to animation itself, there are a couple of useful pages about the animation desk and how to build one. Then we are off into walk and run cycles and a lot of pose drawings. There is nothing at all about timing, about breakdowns, about spacing, about the basic rules of smooth animation, nor even about drawing registration. Sometimes I think veteran animators forget: walk cycles are hard to do. They are not really beginner material at all, in my opinion. When I see a book like this, I wonder if the author actually imagined that anyone could learn much from it.


And the one intriguing feature of the book, a column of cycles presented as flipbooks in the margin of the right-hand pages, was completely ruined by the printers and by a careless editor, who let the book go into print, not just once but in who-knows-how-many reprintings over the years, with pages out of order.  Thus the flipbooks are out of order and make no sense, only creating confusion for anyone trying to understand them. This is why I suggest that the book, disappointing in so many ways, is a good candidate for the Worst Animation Instruction Book Ever.

The book's concluding three pages, under the heading "HERE ARE THE PROBLEMS GIVEN BY THE LEADING STUDIOS", is at last in the right informational spirit, yet the problems are more along the lines of a test that might be given to a story man rather than a candidate for animator.


A final note: I took the trouble to scan all the pages and re-order them correctly. Below is Volney White's flipbook walk cycle, which, as far as I know, has not been seen as it was intended since White delivered his manuscript pages to Walter Foster some sixty years ago.

In addition to the images being in the wrong order, the drawings here were carelessly registered, so that the character jerked about both vertically and horizontally. I re-aligned them vertically by keeping the feet on a constant plane when in contact with the ground. Horizontally, I decided on keeping the mass of the character's abdomen and rear end in about the same place, which seems to work.

In a future post I will include videos of the other two cycles featured in this book.

While on a recent visit to Portland, Oregon, where I lived for ten years, I made a visit to the famous independent bookstore Powell's Books. Among the animation books on their shelves, I found a copy of this book in an earlier format, wider than it was tall, and, sure enough, this earliest edition had the flipbook images printed in the correct order. So they had got it right--before they then got it wrong!