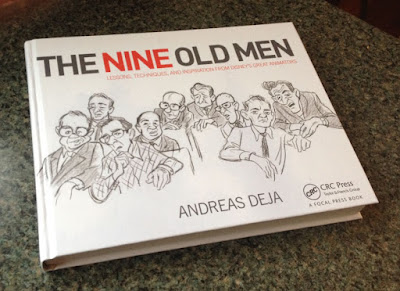 By the beginning of Franklin Roosevelt's second term as President in 1937, he had begun to call the U.S. Supreme Court justices of the time "the nine old men" for their obstructive attitude toward his social policies and programs.  It became his aim to try to replace six of their number in order to get a court more friendly and supportive of his attempts to bolster the economy.

Roosevelt failed in that, but the phrase Nine Old Men was picked up by Walt Disney and applied to his crew of senior animators, who just happened to be nine in number. Who were these men? Among other things, they were all animators who had stayed on Walt's side during the studio's labor troubles of the early 1940s. All nine were born between 1907 and 1914, and all but one started at the Disney studio in the early to mid thirties when intensive hiring and training were ramping up for the move into feature animation. (The exception was Les Clark, who began in 1927 at the age of 20, which made him the only one to arrive before both sound and color came to the movies). None of these young men except Clark had animation experience, and Clark had to retrain himself now to keep up with the sophisticated design and animation that was in development; the old rubber hose limbs and often crude drawing of the silent days were obsolete.

In the new book by Andreas Deja, The Nine Old Men (392 pages, CRC Press, 2015), these animators are spotlighted and compared with one another in their strengths and styles from the personal viewpoint of the author, a brilliant animator in his own right who knew many of them and who actually trained under Eric Larson, best known for his animation of the sultry dog Peg in Lady and the Tramp.

As in John Canemaker's 2001 book of a similar title, Deja's book is divided into nine sections, each devoted to one animator. But the new book, subtitled Lessons, Techniques and Inspiration from Disney's Great Animators, is all about the drawing and the animation, with shorter illustrated biographies that detail each man's development at the studio from novice to mature artist. The latter part of each chapter is comprised of sequences of key animation drawings from important work along the career arc of the artist.

If you want to get as close as you can to the work of a master animator, there is nothing short of being inside the man's head that is better than to look at his pencil animation. I have always treasured reproductions of animation pencil drawings, and there have been some good collections.  Examples in the past include the oversized Treasures of Disney Animation Art (Abbeville Press, 1982) and The Walt Disney Studios Archive Series volume on Animation (Disney Editions, 2009). Both of these are made up of color reproductions (even of mostly black and white drawings!) that have been printed the actual size of the originals. Wonderful to look at, but limited in the amount of material that can be covered in a single volume.  And the otherwise terrific Illusion of Life, written by Frank Thomas and Ollie Johnston (Abbeville Press, 1981), though considered an essential bible by most of us who love drawn animation, contains numerous animation sequences that are disappointing on the page, each image in a stark black and white that illustrates the action without displaying the subtleties of the artist's drawing.

Andreas Deja and his publishers have found a happy medium,  reproducing in color all the pencil lines, because those lines were not only black or grey; a single drawing might also include pencil lines in blue or red--sometimes even green and ochre! The multiple colors were used for roughing in or for indicating match lines or other cues for those who would ink the drawings onto cels. As a bonus, almost all the drawings in the sequence sections include the original drawing numbers written on the sheets by the animators.  The serious student of animation can deduce much about the timing of the scenes from these notations.  Seldom included here, alas, are spacing guides, which can be even more revealing.

Though not the only good animators at the studio, the Nine were all excellent, they had the all-important support and respect of Walt Disney, himself, and they got the cream of the important scenes to animate.  Eventually they mostly became supervising animators, mentoring younger animators such as Andreas Deja, Glen Keane, and many others who were to succeed them when they retired.

Deja has the advantage over other Disney historians in that he lived the life, producing in his own right numerous memorable animated performances such as villains Gaston, Scar and Jafar, and the comic hero Hercules. His insights about these men and their work are keen, and his own unflagging enthusiasm for his subject shines through.

Somewhat amazing is the wide variety of personalities and temperaments among these men who, nevertheless, were all able to sit and perform these feats of acting and creation at their drawing desks. Several, despite their differences, had the discipline and versatility to follow each other's lead in design and animation on a character, so that they could provide sequences of their own that integrated seamlessly with the other man's work.

Any student or practitioner of 2D animation should certainly have this book for both inspiration and study, and 3D animators and designers could also learn from it.  These are the very men who discovered and perfected what are now known as the 12 Principles of Animation.  The Nine Old Men are all gone now, but they have much yet to teach us.