Animating the scene shown and described in No. 49 was a matter of trial and error.  For the most part, the poses worked and it was just a matter of working out the timing.  For example, the two changes of expression (from despair to determination, then to cunning) were at first almost identical in their timing.  I realized then that coming one right after the other, they needed to be different from each other.
Despair to determination is now shorter in frames, and the hold at the end is also shorter, than both those things in the second transition, from determination to cunning.  The latter thus gets more stress, and fittingly becomes the more important.

To view the difference in timing, go here.

One pose that had to be re-done was this one showing her slumped down in despair.  For this character I wanted to use that limp-wristed attitude that at one time was so common among women when their hands were idle, but my first try had produced a pose that did not quite express the despairing mood. 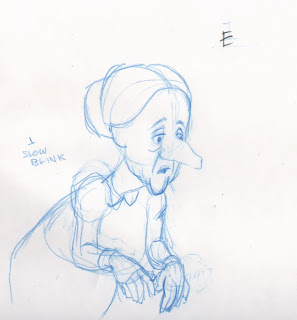 Also, when I saw the test in animation, I didn't like the movement, which showed the forearms and hands pulling back up too far after dropping down. It did not express the intended attitude of resignation and despair.

I replaced that pose with the one shown below, and I damped the movement until it seemed just right. 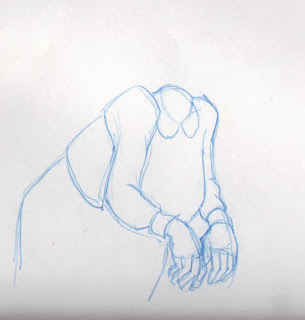 But one thing did go as I had hoped, and I got it right first time out.  This is the final movement where she settles into her attitude of supplication; she is saying, "Give me a break!  What did I ever do to you?"  Her arms come up and she knocks her fists together three times, hunching up her shoulders. 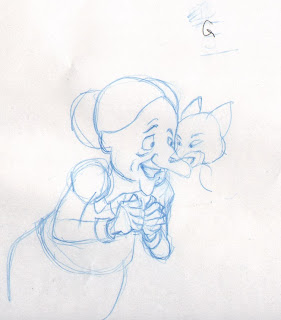 When something like this does go right, it makes all the other struggles worthwhile.